Steve and the young laddie from woolworths

As i arrived home tired from Themes, i jumped on the bus and started chatting to a fairly cute girl from Woolworths. Before long i mentioned the permaculture course, and she was away proclaiming the wonders of a man called Steve! with a twinkle in her eye!!!

Should i give here your number bro? or is the whole long distance relationship thing, not really your cup of tea??
lol

Sometimes, and most particularly the day after nights like last night, sitting up and talking - a lot - until 5.30 am, you just have to have a pie.

A potato top. From the award winning Elite bakery. So they say.

And you know what, like pretty much all pies in New Zealand, it was ordinary at best. Bland.

It made me remember the Montville pie: the greatest pie of all time. And it has been far too long between meals.

If you ever… Continue

Go to Fishpond or Amazon or any of the online bookshops and you can get a barrow-load of books dumped into your browser just by putting "gardening" into the search field.

But are they any good?

I started the Gardening Books Group as a place to drop my own reviews and recommendations and for you to add yours.

Do drop in, the browsing is fine.

A message to her royal subjects? Her Majesty the Queen is the latest person to jump on the green bandwagon by growing her own organic vegetables. It's been decades since the palace has had a vegetable patch. During World War I, turnips grew among the… Continue

howdy folks, I will be replying to friend requests soon, but unfortunately having tech problems with my computer, so once fixed will be back in touch.
Juliette

SPIN-Farming is a non-technical, easy-to-learn and inexpensive-to-implement vegetable farming system that makes it possible to earn significant income from land bases under an acre in size. Whether you are new to farming, or want to farm in a new way, SPIN can work for you because:

Its precise revenue targeting formulas and organic-based techniques make it possible to gross $50,000+ from a half-… Continue

What up in the garden

The vege patch has been left to do its own thing since planting out the winter greens. The most I have had time to do is pick the odd green caterpillar off the brocolli plants when out harvesting silverbeet. Thankfully the frosts last week seem to have finally dealt to the munchers and the leaves of all the brassicas have changed from light green to a dark winter green with the cold.
The plum tree has gone. We cut it up and bagged all the small twigs for future use in the fish smoker. I… Continue 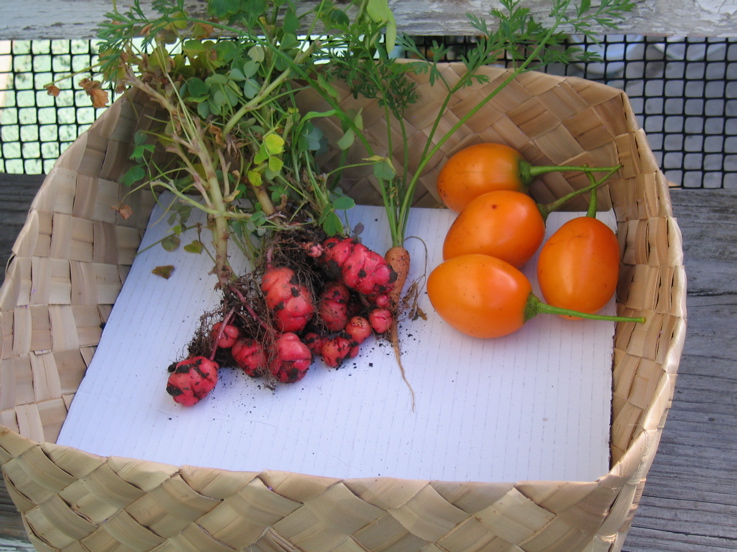 The yams that are grown in New Zealand originate from the South American Andes where they are an important vegetable crop known as oca. The sweet tubers are quite small, often about the size of your thumb, are pink-orange in colour and have a slightly shiny and ribbed surface. Other varieties which are sweeter, slightly smaller and coloured yellow, apricot and golden are available. New Zealand yams are very different from the tropical yams grown… Continue

Getting their gardens home delivered

United by commitments to the environment and reverence for the magic of soil, a trio of urban ag outfits are bringing farms directly to their customers, removing sod, building beds (raised, amended, or both), and… Continue

By PATRICK GAVIN
Ted Allen was the food and wine expert on Bravo's "Queer Eye" and now hosts two programs on the Food Network — "Chopped" and "Food Detectives." POLITICO caught up with Allen during his recent swing through D.C. and picked his brain for a foodie's take on the Obamas.

A Chicken in Every Yard

There are at least 30 off-the-books flocks in backyards throughout New Haven, and East Rock alderman Roland Lemar has hatched an ordinance to regulate them. He's tentatively… Continue

How can we grow food locally?

By Incredible Edible Huddersfield
Incredible Edible in the Golcar area has started growing raspberry canes and herbs on waste land. Local people have reclaimed land that was once outside toilets space and have had successful bean crops for 2 years. Now planting in alternative planters, bookcase, discarded wire shopping basket, paint tin and wheel barrow gradually involving neighbours and… Continue

By FoodWeek Online
Food imports will reach a record $8.5 billion in the 2008-2009 financial year - an increase of $1 billion on the previous year.

The nation's food industry says that the level of imports will continue rising as consumers buy more home brand products. Fruit and vegetables top the list of import categories at $1.7… Continue

By JOCELYN NOVECK
At the bustling Pi pizza restaurant in St. Louis, the staff has come up with a new mantra: "It's just pizza!"

Just pizza, and yet still, they marvel, customers are happy to wait well upward of two hours at peak time for a table. That is, ever since news came out that Barack Obama loved this pizza so much during… Continue

By Joe Lamp'l
It’s no secret, gardeners are optimists. But I have to tell you, if I’ve ever been challenged on that one personally, it’s right about now. Seriously, since the day I planted my seedlings and seeds into this garden (over two weeks ago), we’ve seen the sun only twice. The rest of the days have provided various levels of rain, dropping as much as three inches in less than an… Continue