Our guest speaker this week was Mr Brian Storey. He showed us how to plant seed...
Using a multi-purpose compost, loosely fill a planter and water the compost.
Level off the compost with a piece of wood.
Get the seed, and ALWAYS open the packet over the planter so if there is any spillage it goes straight into the compost.
If your seeds are black, put them into a pot, add some flour and ske it up to cover the seeds making them more visible.
Empty the seeds into the palm… Continue

I love this time of year, getting the garden going again after a winter of brassicas and leeks. :-) Today I tamed the berry beds, tying back the gooseberry and red and white currants against the garage wall in fans. The black currants and cranberries are remaining free-standing bushes. The strawberries needed serious thinning (better late than never!) and I'm hoping my orangeberry will take off this year. 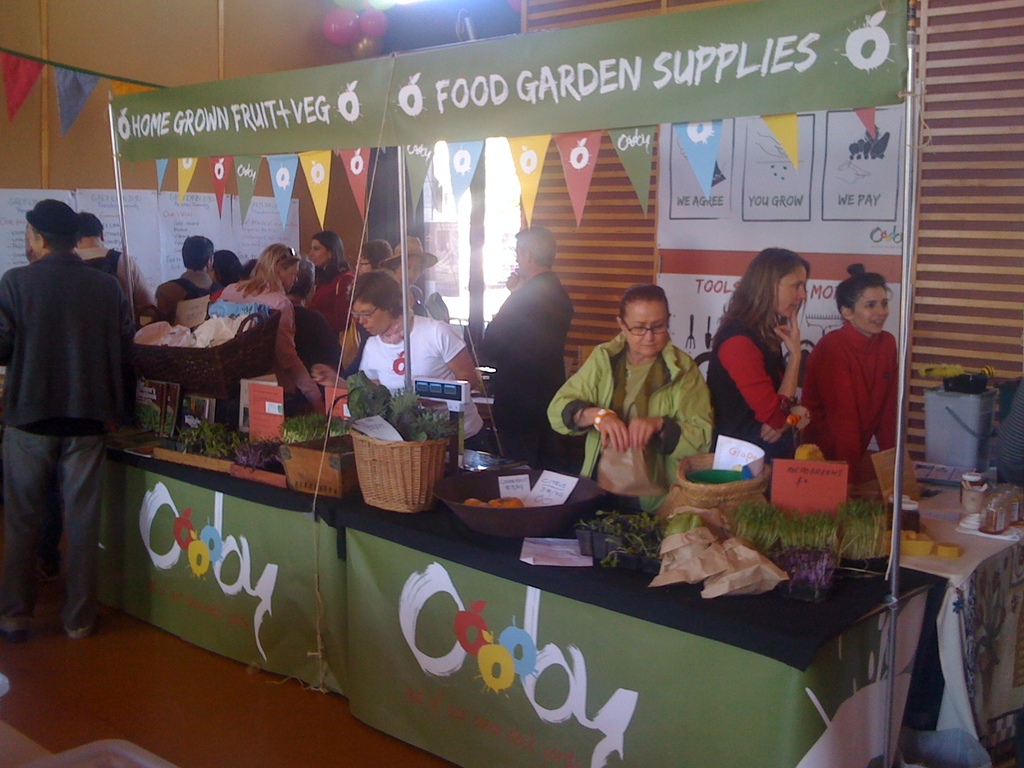 What a day it was. Vince and the GLFM team did an amazing job of launching the Grey Lynn Farmers Market on Sunday.

The crowds swarmed around the Community Centre for 4 hours and just about wiped out every stall holders lot. 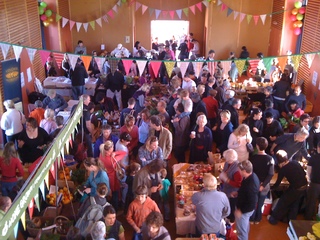 The Ooooby Stall was no exception.… Continue

Okay, I know this is a blog site about growing food . . . . but I aint growing much in the way of food yet . . . but I did manage to wrestle the rose garden bed into submission over the course of this weekend. It was an epic battle, and involved the digging out of a large succulent (which fortunately had very shallow roots) but the garden is now composted, mulched and edged with rocks. Oh, and has three carpet roses planted in it (two of which may or may not survive - they've lived in pots for… Continue

My seeds arrived yesterday, from Ecoseeds and Koanga gardens. Very exciting!
I'm planning on sewing most of them from the 18th of September as suggested by the moon calendar. I've never grown things by the moon so it will be interesting to see if there's a noticeable difference. I planted some tomato and capsicum seeds a couple of days ago (at the 'wrong' time for the moon), so I'll have a live experiment happening.
The chickens are doing well decimating the garden. Its interesting to… Continue

The Real Gardener of the Year

Click on the link to see my favourite gardener in action...my dog!

It's my favourite time of the year. My fig tree now has leaves on the very ends of it's branches (below) and the seed trays on the dining table are starting to come alive. Everything is full of promise!

Last year when I was completely new to having a vege garden and everything seemed to take soooo long, I had doubts that it all would come to fruition and felt a great deal of impatience, but this year I am just carrying on doing a little bit here and a little bit there, happy in the… Continue

I am now the proud Mum of 20 wee chicks that started hatching yesterday morning. I incubated them in a hova-bator (despite many warnings that this machine is not great). The eggs are being looked after in our hot water cylinder by our pet chicken (named 'Princess Fiona' by my 6 year old daughter). Fingers crossed they all thrive.

From 36 degrees to -1! A bit of a shock. The garlic has come through with one weed so the carpet of leaves and grass clippings laid before planting works! Wind has caused some damage (Blue Peter rhodo has been blown over), lots of weeding to do, and seeds to plant. Well, I've cut my fingernails, will stop being a 'spoiled rotten lady' over the past few weeks at the places we've stayed, and it's back to work! Two highlights - the visit to Eden Project in Cornwall, and the Versailles replica at… Continue

Does anyone want a tame Muscovy drake (possibly 2) currently languishing at Bird Rescue and desperate to get out of his cage?
Phone Lesley on (09) 818-3953

Heres to the summer that didn't happen.

Strange as it sounds the garden looks great, but the damp cool weather we had seemed to stop production.
California has big fires and the smoke is keeping me inside most of the day. I will have a hot cuppa in the shade thank you.
I hope everyone is going to have great success in the garden this season.

10 Ways to Barter for Food

By Roxanne Webber of Chow.com
Bartering saves money, keeps food local (and seasonal), and allows you to meet neighbors and build community. Here are some of the ways people are trading food, what they’re sharing, and advice about getting involved without getting in trouble (bartering is considered taxable by the IRS, and… Continue

by Mike Chino at Inhabitat.com…

Today I tried again with my parnsips - the last lot failed to germinate. This was no surprise after catching Celeste the cat using that part of the garden for her toileting requirements on several occasions.

My 78 year old neighbour, Clyde, has told me that the best way to sow them is to flood the area (doubly necessary I suspect, in my case after Celeste's antics) and then scrape back the very surface, put the seeds in and lightly cover. Next, cover them with wet newspaper. In 3… Continue

wish it would stop raining

its the first of september and I haven't really had the urge to start many seedlings yet, just some leeks and onions and some mesclun, its been so grey and dismal in August. will the sun ever come out? Oh yes we did sow some wando select peas on the weekend during a fine break.