On a recent trip back to Aus we spent time with our dear friends Craig, Jemma and kids on Shambhala Farm near Maleny Qld where the spinach is the size of a young child. 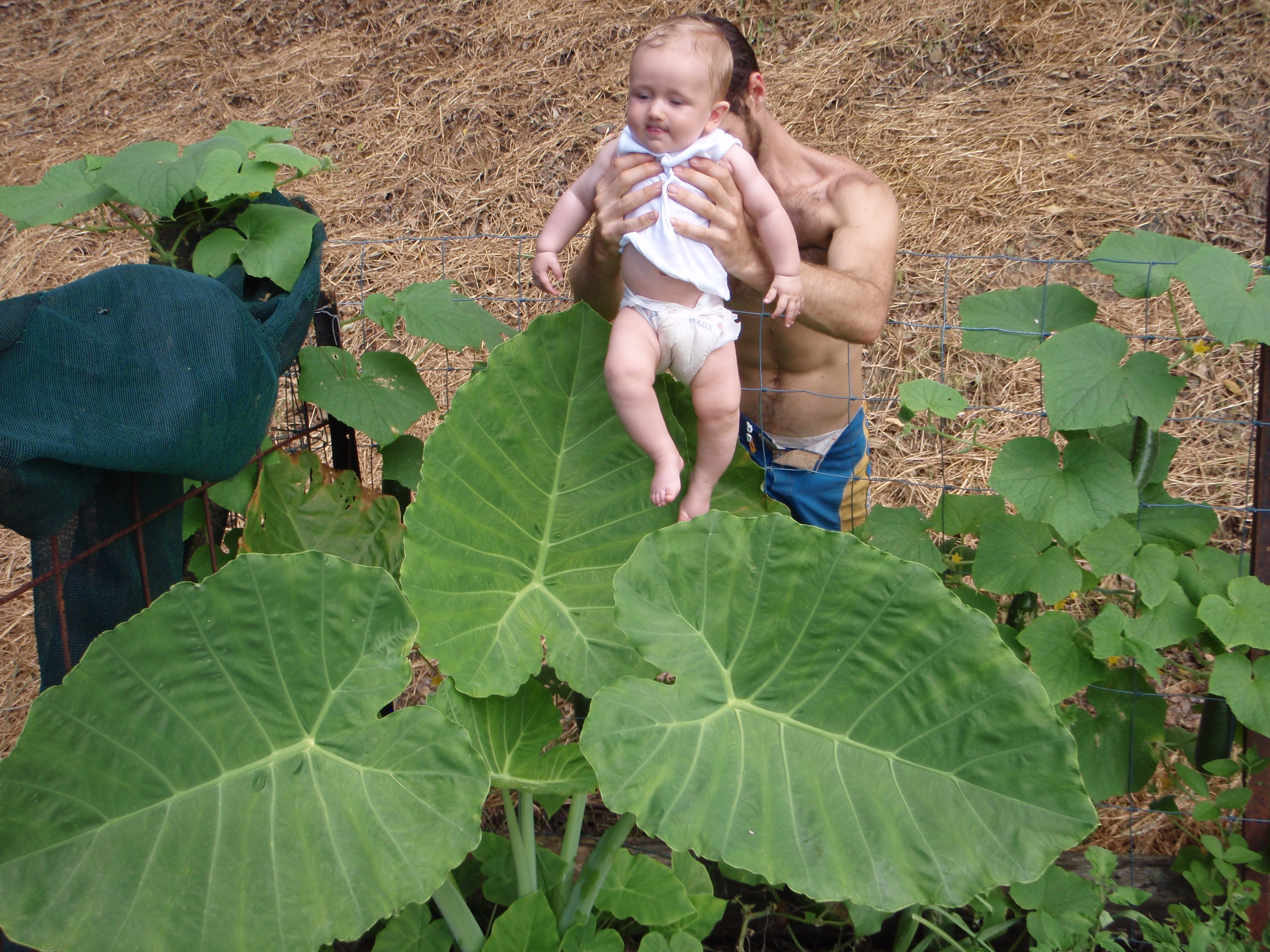 Craig took Toby and I for a wander through the wild orchard to see what we could see. Below is a series of videos from our jaunt.…

I got my no dig garden started today. My sister was round and said she'd help me so we got stuck into it. I ended up using sone of my worm farm trays to put in the garden (I have three worm farms that my dad got for me off the council clean up so i have plenty of trays). I figure this way I can take my garden with me if I move, which I might soon, who knows.

My sister found some compost for me in the gutter of the garage, that was awesome, so I was able to use that to plant my basil… Continue

The Naked Carrot - Jim the Farmer 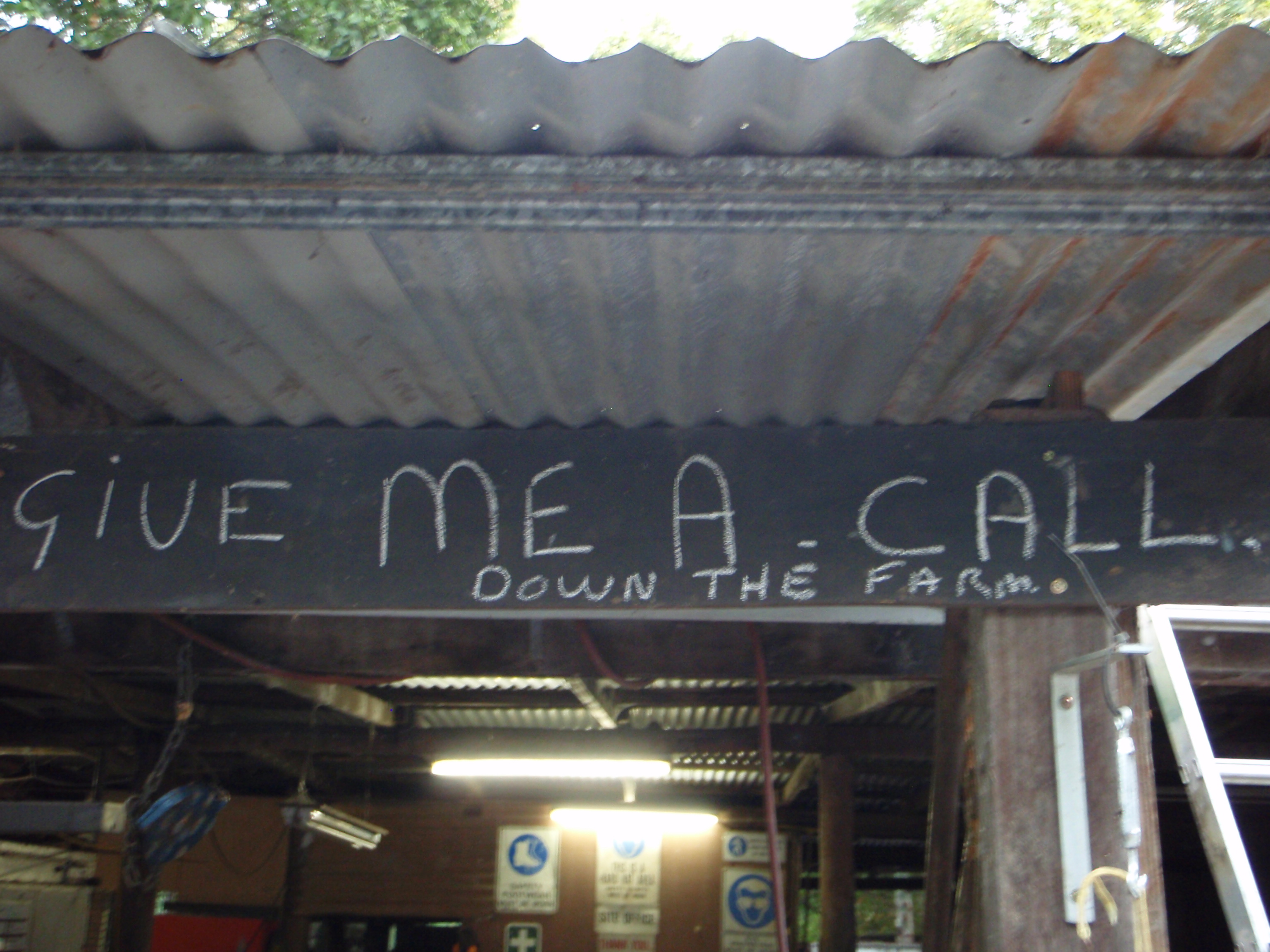 We have just arrived home from a trip to Aus. While we were there we stayed with our dear friends Craig, Jemma, Isaiah and newborn Kaia. One afternoon Craig told me to hop in the truck... he wanted to show me something. We drove about 4 mins to a neighbours home. We pulled up and met Jim the Farmer.


Jim is a fair dinkum top bloke. One of these people who are living life in a way that make the world a much better… Continue

My parents came back with my lucerne hay bales today. I am very excited about this. My seedlings are coming along nicely. A total of 15 broccoli and 12 mixed salad have emerged now.

My worms are busy reproducing so my worm farm will be able to be properly back in action shortly. I am just so excited about this supply of veg scraps I can get from the fruit and veg shop. I could have a complete compost factory going in my backyard if I wanted to! And I do want to! I think I should… Continue

This morning I gleaned a whole heap of vegetable scraps from the dumpster at the fruit and veg shop down the road. It was mainly big cabbage and cauliflower leaves, corn husks and really ripe tomatoes. I hope some of the tomato seeds survive the compost heat because they looked like beauties and smelt amazing. I think some of them were actually good enough to still be eaten. I think next time I just might give them a wash and cook them up!

I decided to chop/rip up most of the stuff… Continue

Writing a plan to present to schools

I have been working on a plan to present to schools to ask them if they'd like me to come and set up a garden with the children in their school. I thought a good place to start would be to get composts going, so I have made a list of a whole bunch of lesson ideas related to composting, including note of how they relate to the syllabus. Included the idea of using Ooooby to share ideas with children at other schools as discussed with Pete Russell.

I have made links with all the… Continue

12 broccoli seedlings emerged over night. And there are now a total of 8 seedlings that have emerged in the mixed salad tray. Very exciting. They came up faster than the seed packets said they would.

No parsley seedlings have emerged yet.

I also have a tray of mixed seeds that I planted a week or so ago into some worm castings. I just had a whole bunch of old seeds lying round, some of them really old, so I thought I'd throw them all in a tray and see what came up. Quite a… Continue

http://www.pfaf.org/leaflets/vegorg.php
Plants for a future seems to be a worthy site to visit. Lots of organic vege gardening information.
Edible, medicinal and useful plants are listed.

My large fig tree is starting to burst with ripe fruit that the wax eyes are having a feast on. What is the best way to use up figs? I dont have a dehumidifier but would like dried figs - how do you do it in the oven - any clues. I am also after a ginger beer bug or where do I buy Brewers yeast that is not pasturised - somewhere in Manukau or Howick.
My garden is slowing down now and the corn has finished (although I still got to put a bag of it in the freezer), and most other summer… Continue

How relevant is this poster today? Amazing how things come full circle.

I spent an hour scouring the beach for seaweed i didnt find much as we were out at Cornwallis beach and its quite open out there found about a carrier bag full there was some bull kelp neptunes pearls and a black leafy one i added this lot to my barrel to rot down and act as a fertilizer.

Leaves from the street

I went for a walk with my sister and her baby and my sister suggested I scrape up the leaves from the street to put in my compost. So I did just that! I got the wheelbarrow and walked up and down the street collecting half composted leaves that had piled up against people's fences. I got a lot of leaves!

My sister also told me to put a cup of my pee in the compost to give it a kick start.... will do.

And, a third seedling has emerged, also in the mixed salad tray.

Gardener with 20years experience in growing organic food, harvesting and processing to zero waste looking for house 2 caretake,manage or rent for a minimum of 2years. Can vacate at Christmas. I am looking to either develop a property with food or manage an existing one. I have excellent references and a great tenant history. I have lived on Waiheke for the past 3 and half years. This year have grown over 40 kgs of garlic on the island.

I went down to the local green grocer and asked them if I could take some of their vege scraps from their dumpster. They said I was most welcome to any time at all but the bins are emptied on Sunday nights so the best time to come is not Monday morning because it's hard to reach the scraps in the bottom of the dumpster. I did have the urge to climb in when I saw all the scraps in the bottom, but I didn't want to freak him out so I said I'd come back later in the week when the bin was a bit… Continue

Oh and I forgot to say! Two little seedlings have emerged! They are in the mixed salad tray so I'm not sure exactly what they are. Very exciting.

I am very excited because I remembered last night that my Dad had a big tumble composter sitting in the backyard that wasn't being used. I assume he found it on someone's throw out pile once upon a time and grabbed it knowing it was a piece of gold. It's practically brand new aside from some little bits of rust. So, as soon as I got up this morning, I mowed the lawn and did some pruning and got that compost tumbler tumbling. I also dedicated my kitchen scraps to it (which is good because my… Continue

My parents are passing a horse supplies shop on Wednesday and are going to pick up some lucerne hay for me. Mum has given me permission to take over a bit of the paved area in the backyard as well as a garden bed that was overgrown. I am going to no-dig this whole area and plant my seedlings into it when they are ready. It'll be a decent area, about 5m by 2m. Maybe bigger. She didn't want me to take over any of the lawn. There is also a patch near the letterbox that I don't think she'd mind me… Continue

We had a quiet day and were taking it easy after church and i received a call from k mac about swapping vegetables i had intended courgettes but my wife Mandy gave a few to our friends yesterday so we made up a little basket of goodies from our vege patch there were carrots beetroot courgettes broccoli and tomatoes and we gave some bunches of grapes from off of our grape vine. We swapped for a whole bucket of peaches and a heritage peach tree i cant remember the name she even gave me some… Continue

About the photos and a bit about me 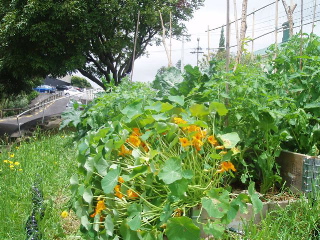 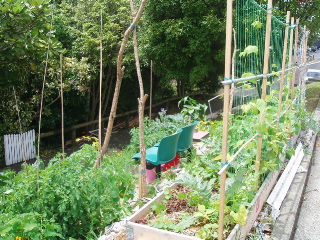 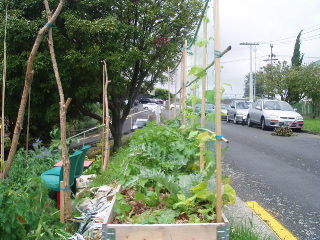 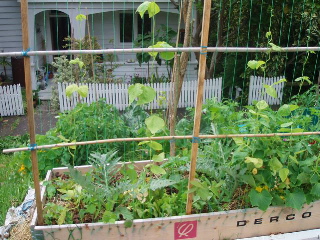 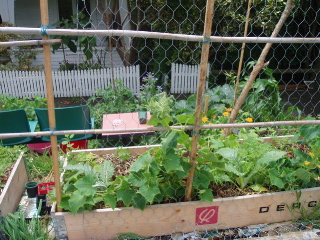 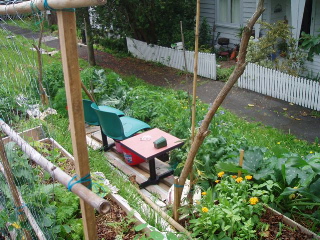 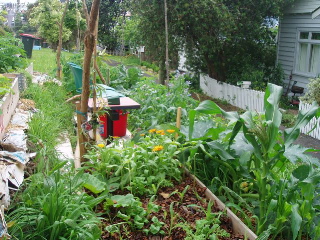 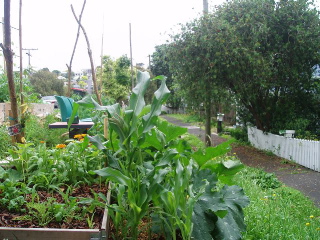 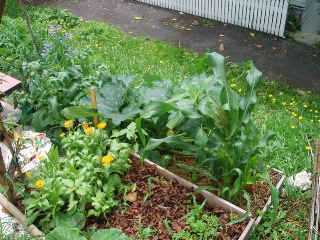 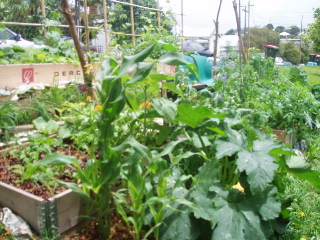 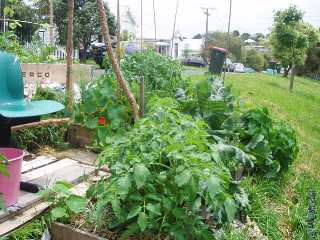 It was a small group, and a modest harvest, but a great start. Much of the harvest has been set aside as seed for the next planting. We agreed that we would plant up the entire 20 metre organiponico bed with spuds this time. 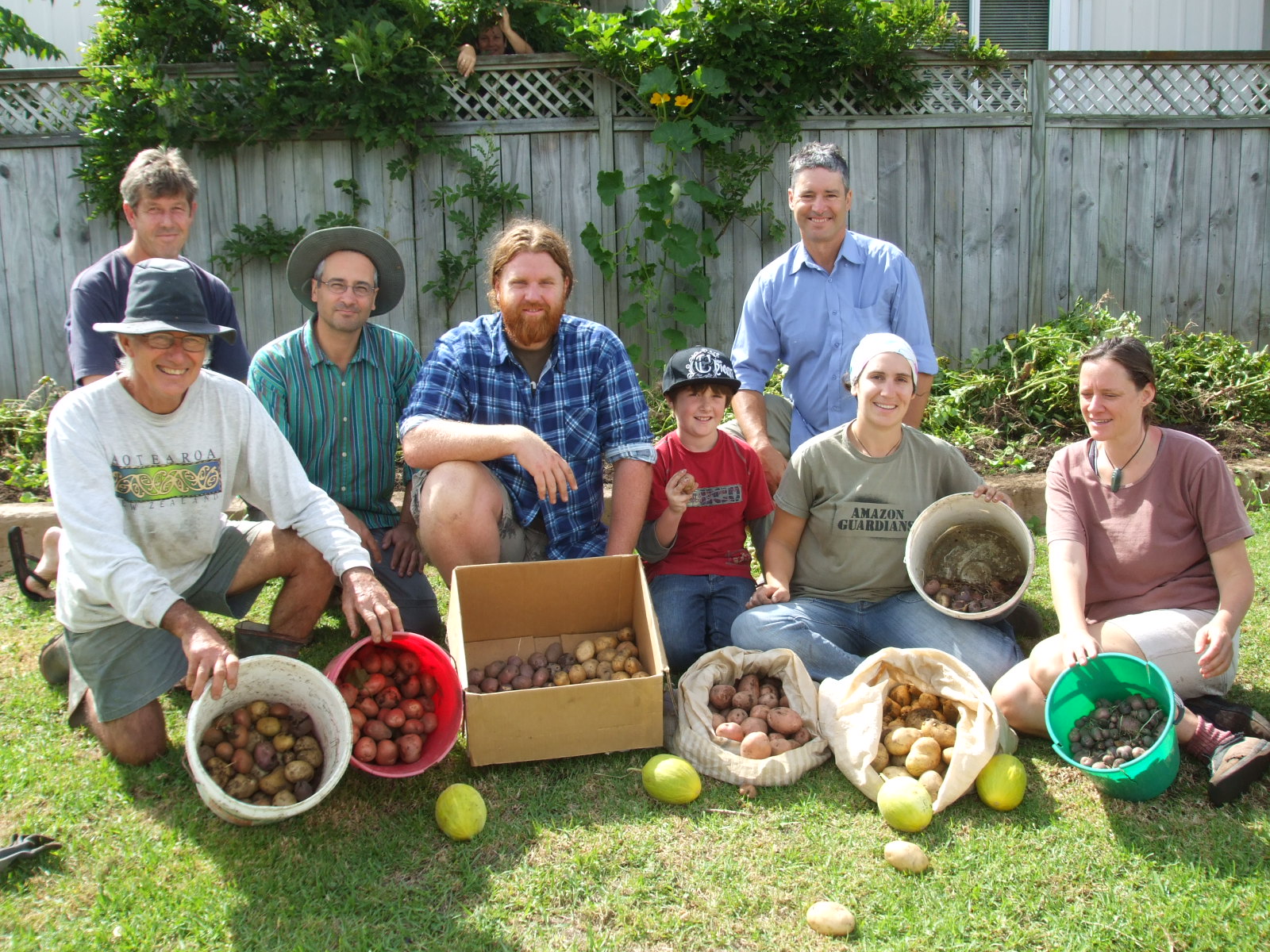 In the meantime wheat was sown and the tops of the plants laid back over the bed as mulch. This will add nitrogen to the soil and should give us a… Continue