Dug down through the topsoil, a layer of horrible grey clay mixed with stones, another layer of yellow clay and then found the original farm topsoil from before the street was sectioned off. If my trees can get their roots down to this I think they will survive without irrigation. So I now have to excavate under half my trees to remove the ston layer.

The Dirty Dozen and The Clean 15 I’m a big believer in take care of your body and it will take care of you.  If and when I can, I buy organic fruit and vegetables.  I am lucky enough to live in a house that has a little vegetable patch with herbs, spinach and occasionally kale.  It’s free, easy to grow and no spray!

Is it better to buy organic?…

Will this Tamarillo recover? 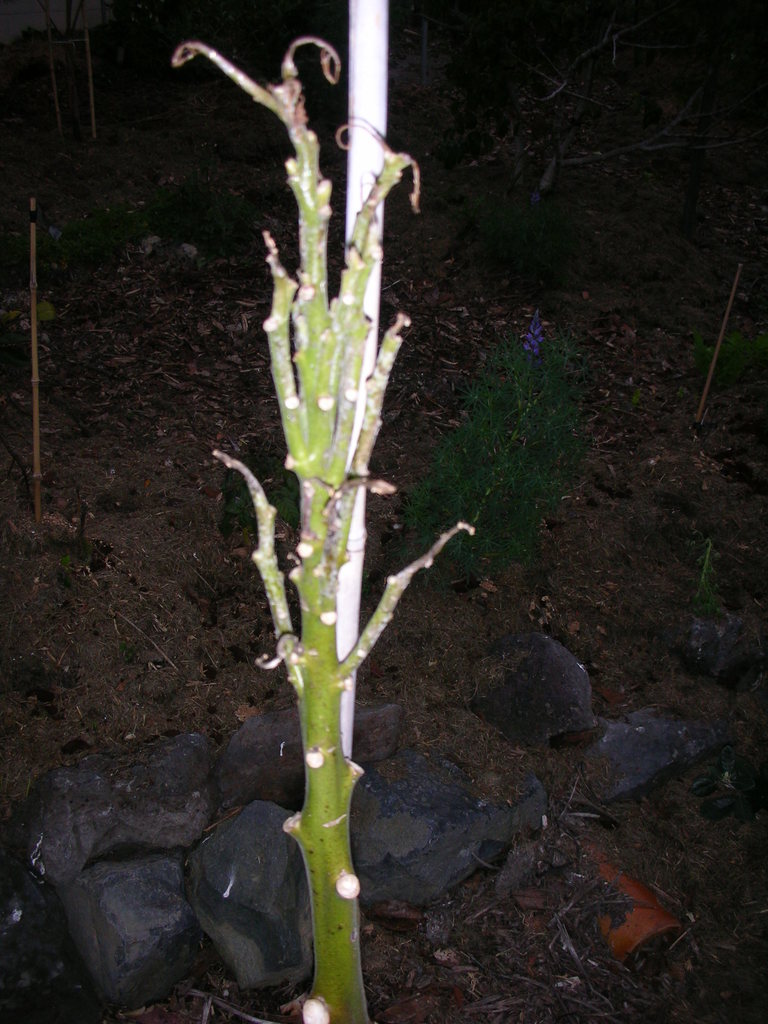 Took off at first, then got attacked by whitefly, developed leaf discolouration, then shed all its leaves. Is it dead? Cant find any pics of the exact symptoms. 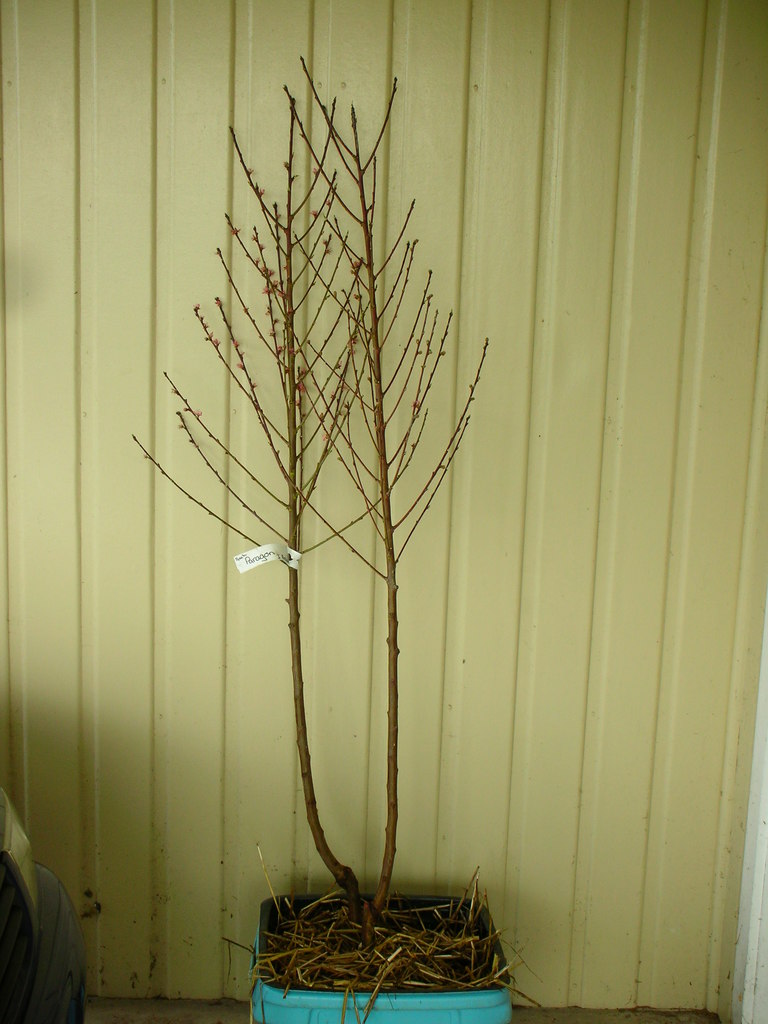 For those gardeners not yet stung by the beekeeping bug! An Alternative to Honey Bees For Pollination!! 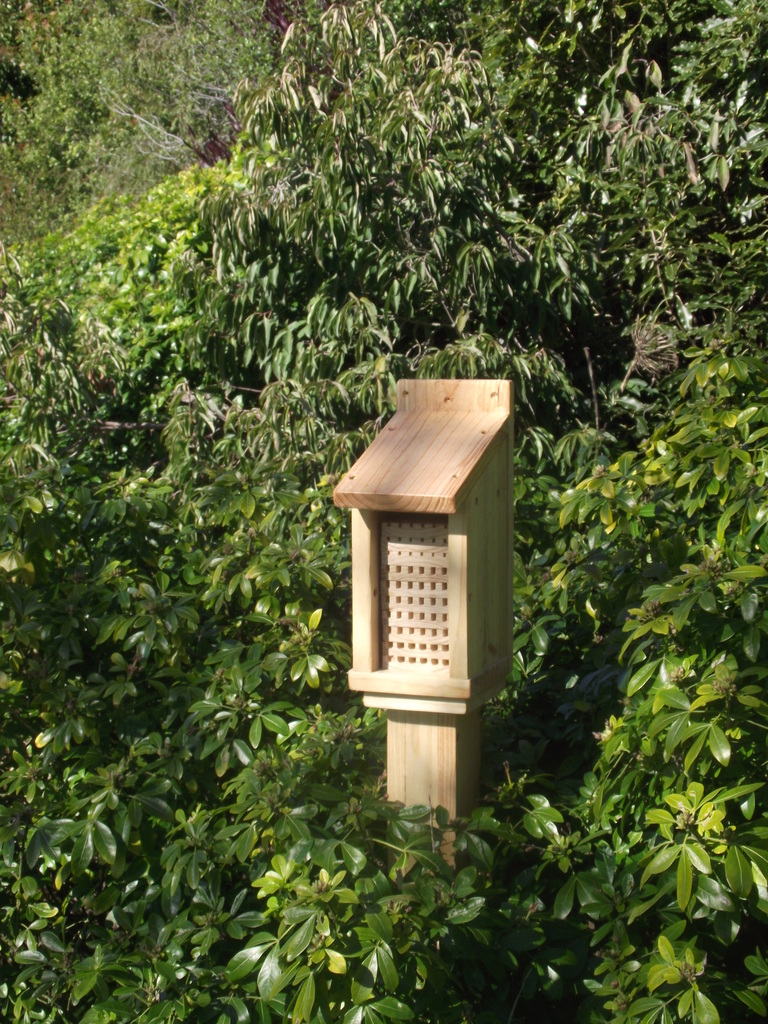 For those gardeners not yet stung by the beekeeping bug, bumble bee nesting boxes and solitary bee houses can offer a pain-free introduction to apiary.

Passionate about the future of bees in New Zealand, Ian Morton from Creative Woodcraft has teamed up with a pollination expert to help Kiwi gardeners encourage native… 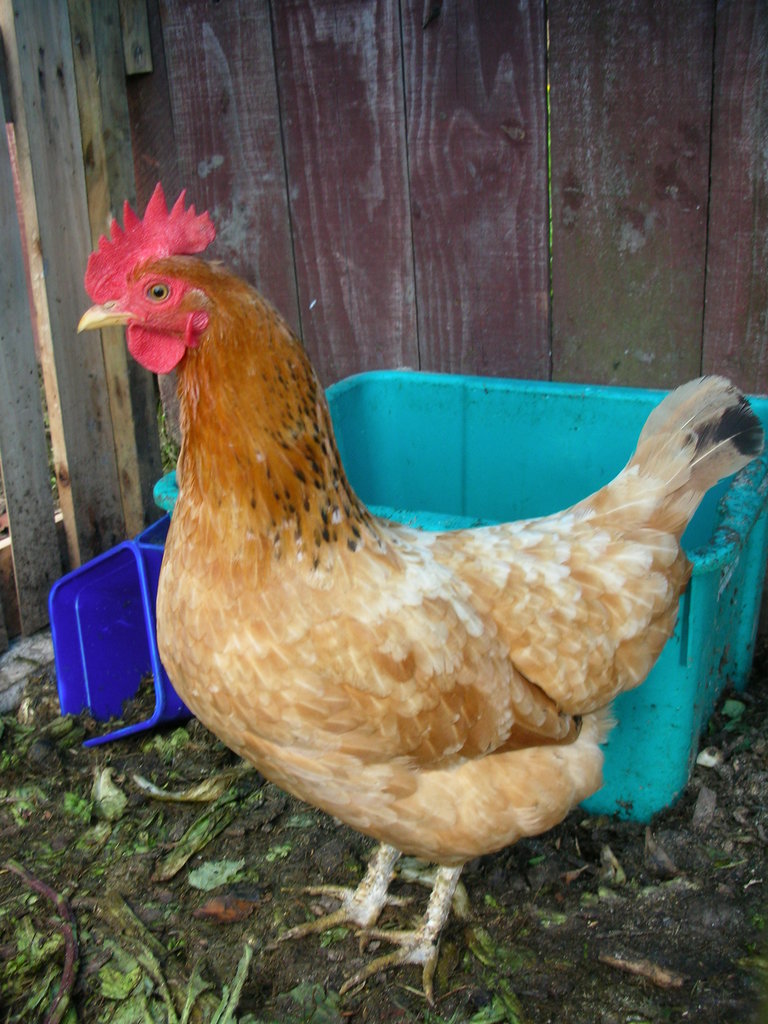 We have regretfully decided to offer our two lovely chooks free to good home.  They are Loman Lite, which is quite a new breed to New Zealand, look like brown shavers but with different coloured legs.  We got them early January 2010, when they were 14 weeks old, so they're coming up to 3 years old later this year.  Hatchery vacciinated. 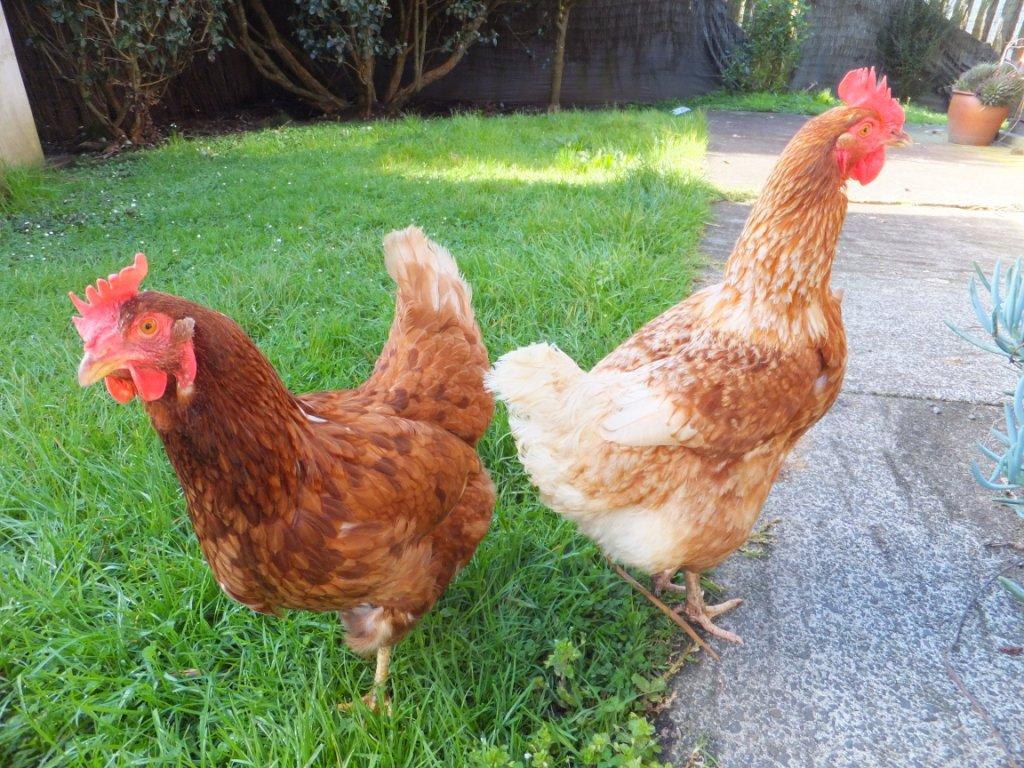 Hole in the ground

Soak hole turned out to be sheet drainage. Have removed a 1.5 m dia hole, chucked in some logs, twigs etc. and refilled it with the topsoil ready for the peach. Im now worried about the Tagasaste which can go down 10m, the citrus which need 3 to 4 feet for tap roots, and the Maqui berries which I cant find any info on whatsoever. This is a good lesson for planting urban sections - find out what the idiots have buried before you start.

One cabbage tree died suddenly this winter so I dug it out and found it was over a scoria filled soak hole, so probably drowned. I want to put a peach or a fig in its place but am worried water is being directed to the spot by a drain so will have to either excavate the area or put in something shallow rooted.

I noticed that the girls stay out of the sun after 10am so have put a temporary cover over their foraging area. It was also getting too wet underfoot so is drying out now. Egg production has dropped to 3 or 4 a day from 5. 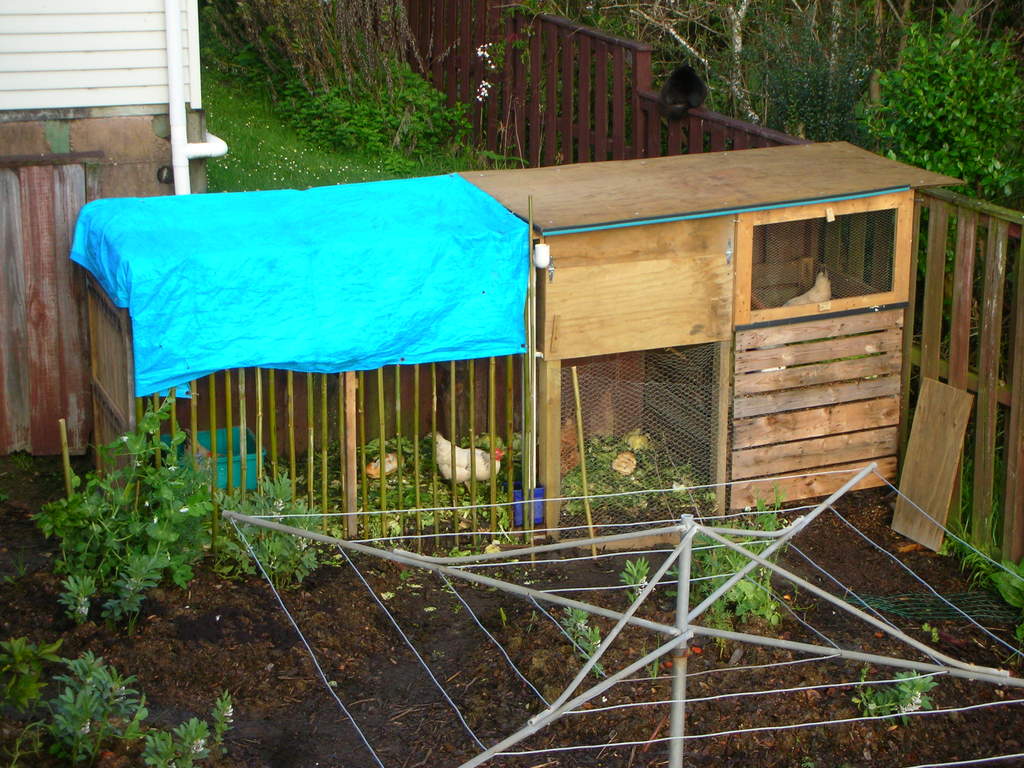 Im isolating one bird a day to try to find out which one is not laying. Will isolation cause them to not lay? I figure they must have a series of eggs being developed sequentially at any given time so can they hold back on laying if stressed for a day? 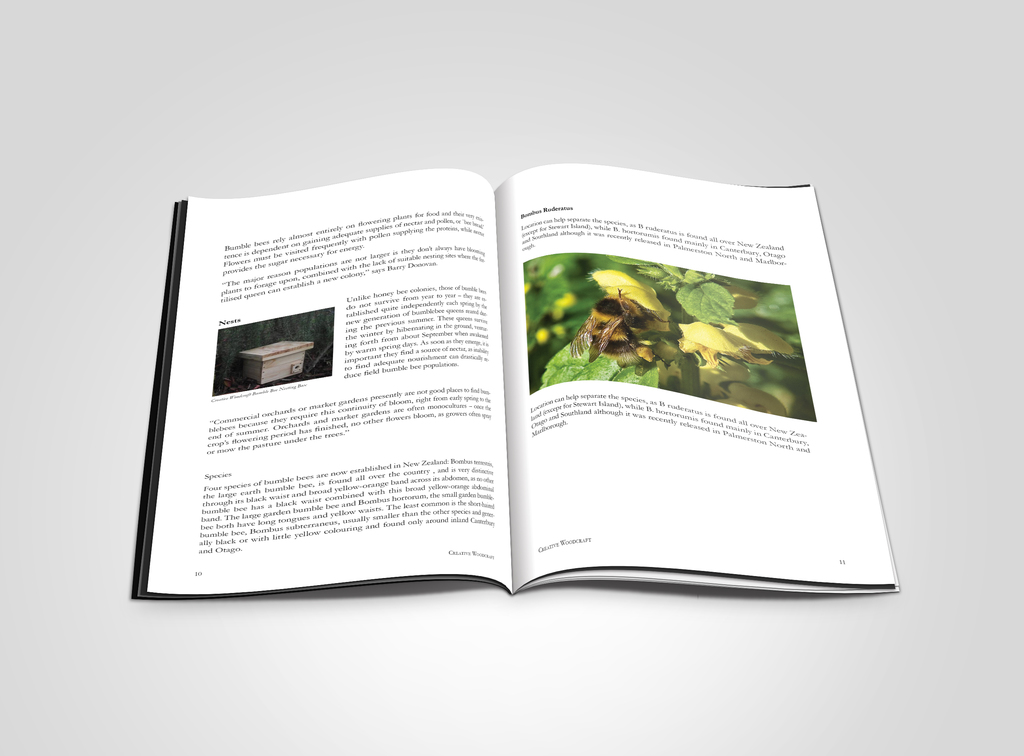 Our Native Bees are extremely efficient pollinators and are an excellent supplement to honey bees as pollinators of our food supply. You can help increase our native bee populations by providing Native Bees with healthy nesting sites and habitats.

Yesterday I paid $16/kg for chicken mince so Im now looking at my girls in a different way - Im seriously contemplating raising some for meat, so will have to visit the library for some relevant texts. Mollison argues that the vegan contention that a meatless society will solve the worlds food crisis is a fallacy. He reasons that the more complex systems in permaculture are by far the most productive in terms of bio-mass but that livestock (which includes poultry and aquaculture) is required… 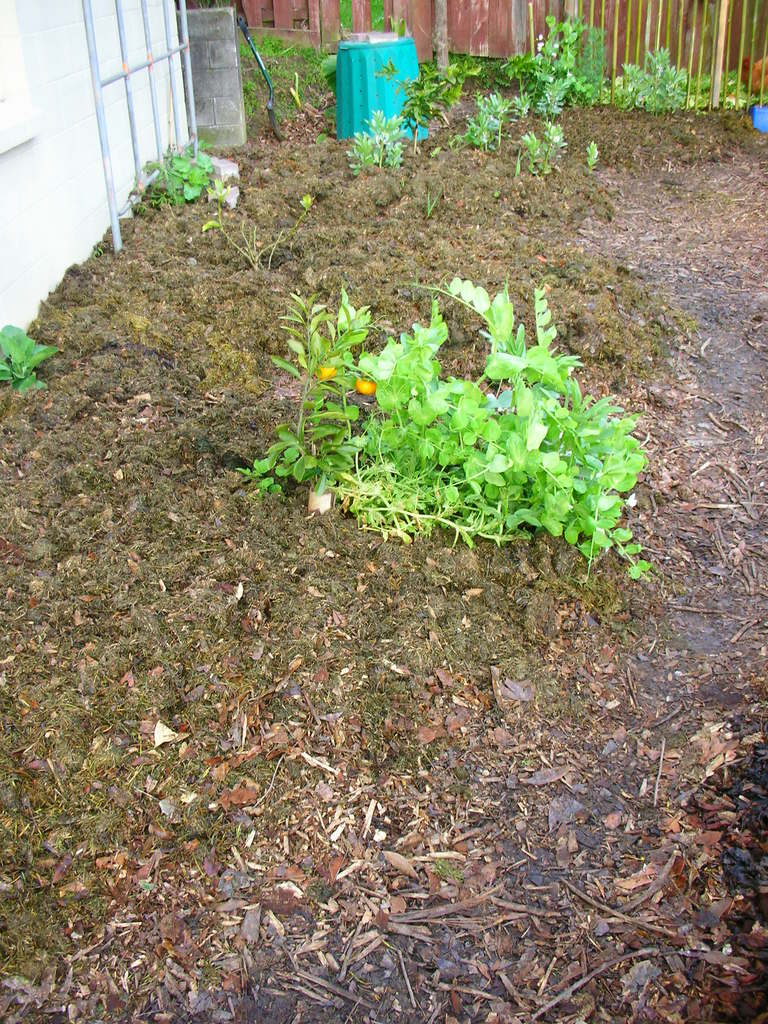 After the third attempt the first batch of grass clippings was finally delivered. This will be an infinite supply of nitrogen and represents a win-win for me and the contractor, who is normally charged for dropping it to the compost manufacturer. This had been bagged and was starting to compost, which gave me the idea that if I can get it fresh I can make silage to feed the chooks. Silage is pickled grass using anaerobic fermentation so you just have to compact it and seal the top. Properly…

Transplanted some ivy from the boundary fence to the West facing house wall. If it attaches itself it should insulate the house in summer and winter and soak up some of the rain running down the wall. I calculate the section is getting around twice the rainfall it would naturally get due to rooves, driveways and wall runoff. The problem is that while its way too wet in winter, in summer the extra water would actually be beneficial. The more I think about the problem the more I think some…

Scored a sad little lime tree and a fig off TM for $1.50. Seller has a sloping section suffering from runoff and badly needs to put in deep draining swales off contour and terraces but she is mucking around on the surface. Theres no substitute for background reading and Mollison insists that contouring is the first priority, to control water flow.

Made the first real egg custard for my German apple cake. Nailed it.

The first batch made with the home grown eggs - nice yellow colour and more complex flavour. Dunk in coffee for a breakfast treat. 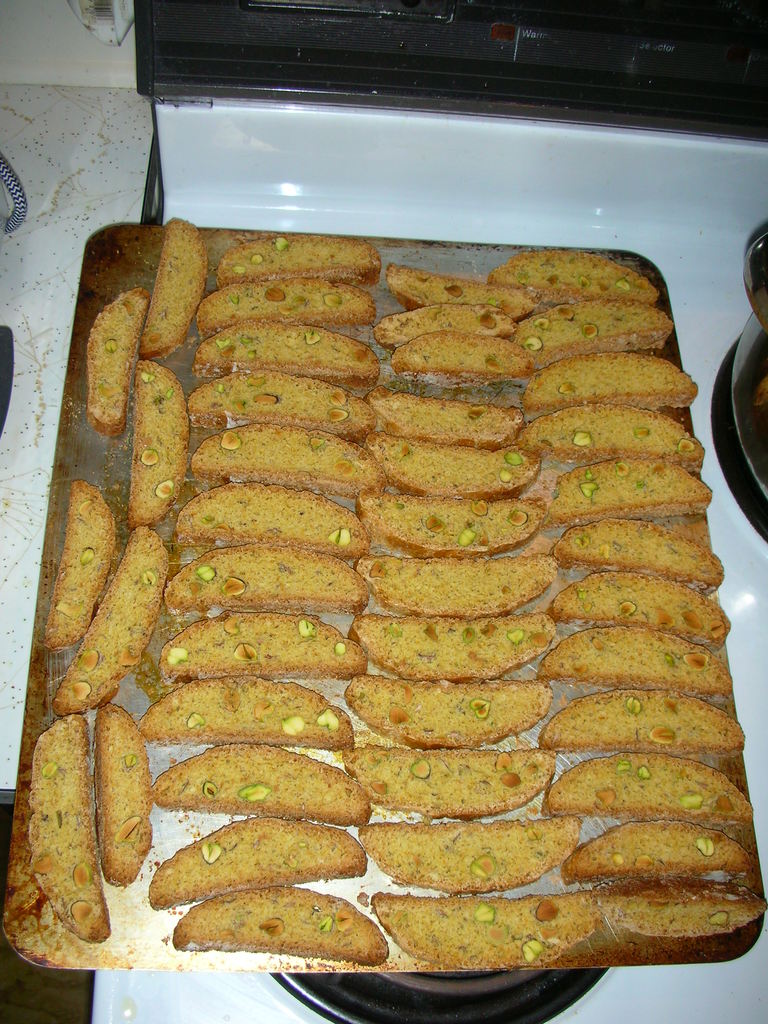