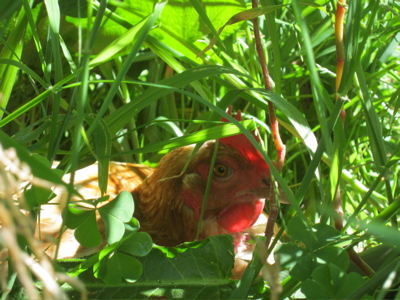 Day two of Beryl and Ruby’s residence.
I got up before 6.00am this morning, but Beryl and Ruby were already out and about.
They were very settled and roamed about the yard as comfortably as if they’d lived here for weeks.
It was very quiet this morning. I think everyone in the neighbourhood has sold their roosters. Normally they start crowing before the sun is fully risen. I always thought my Vincent crowed in response to the all the others, but maybe he was the one who set off all the rest. I will listen again tomorrow.

The family who collected Vincent last night brought a cat cage to transport him in. Too small. So I found a big cardboard box and he went away in that.
Yesterday afternoon I put the makeshift nest boxes in the garden shed when it started to rain.
When I went to get them out this morning I realised that the Chooky 5 Star favourite box had been the Vincent transporter. Gone.
I went in search of another superior cardboard box, thought I’d found it, set it up with straw and put it in the same position as yesterday’s.
No good. It didn’t have the x factor.
Beryl set up shop under the orange tree. Screened by long grass she settled down to make her own nest.
I conceded to her superior talent. Today’s egg took longer. We had a visitor so I was in the house when I heard that it had arrived.
By the time I went out to collect it, Ruby was taking her turn on the new nest.
Later in the morning I collected two eggs.

I opened the gate between the two garden areas where the hens were so that they could gradually join forces.
Flo and Violet came up into the yard beside the house where the Shaver girls were in residence.
No battles.
Later they all were further down the garden in the area where our chooks normally live.
I was cleaning out the henhouse in preparation for the new hens moving in. 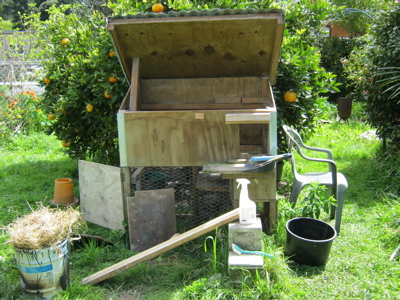 After some time had passed I decided that all four hens were co-existing peacefully. Time to shut the gate and reclaim our chookfree zone around the house.

Later in the day there was a thunder storm and heavy rain. I had to go outside and close up the hen house, which I’d left open to dry, after being cleaned and sprayed with diluted Domestos.
Then I checked on the whereabouts of the hens.
Flo and Violet where sheltering under a Camelia bush.
Where were Beryl and Ruby?
After a brief search I found them at the bottom of the garden wallowing in dry dusty dirt beneath the trees. They looked like a pair of ladies enjoying a hot spa tub in the rain. 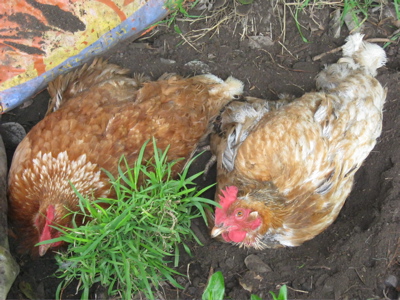 Tonight at dusk I went down to check on the sleeping quarters. Beryl had gone up into the hen house after Flo and Violet. Beryl was lingering nervously on the bottom step. I lifted her up to the doorway. She still wasn’t sure. I gave her a wee push and in she went.