"Floods, drought, climate change and even war are all directly related to the way we are treating dirt" 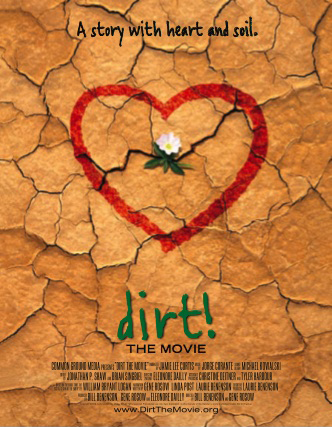 "Dirt! The Movie" is a powerful new film about the relationship between humans and soil, reminding us that we are made of the very same elements as the soil beneath our feet, which is ALIVE! - a living organism made up of living organisms - just as much as everything above ground.

The film features several characters with various relationships to the soil: Paul Stamets the mycelium expert (who wrote the very much recommended book "Mycelium Running"), the environmentalist and founder of India's Navdanya seed-saving institute Vandana Shiva, the founder or Tree People Andy Lipkis, Nobel Laureate and founder of Africa's Green Belt movement Wangari Maathai, Alice Waters herself, and even a wine expert who swears that the key to the flavour in wine is in the flavour of the dirt that the vines are growing in (he even tastes the soil to determine the potential quality of wine). And more!

At one point in the film someone points out the problem that most people are not attuned to the language of dirt. We can't hear it screaming out for help. It's just "dirt," we wash it off our cars, we don't want our children playing in it, we cover it over with concrete. We have lost contact with soil as the source of all living things, ourselves included and all that sustains us.

Many people when they buy their produce from the supermarket don't necessarily make the connection that they are supporting the hugely detrimental machine of industrial agriculture, it's effects on the land and the displaced people who can no longer live off the devastated, degraded, desertified, pesticide-ridden, infertile land. Buying a bunch of bananas from some faraway place can be the equivalent of partaking in mass genocide. It's no wonder that supermarket shopping is so depressing. Not only is food grown in mono crops grown in soil that is devoid of nutrition, but it is leaving death in its wake.

It can be an overwhelming reality to face and one that may leave you feeling hopeless, afraid, in a panic like the forest animals in the Parable of the Hummingbird, who are watching their forest burn in a fire. Meanwhile the hummingbird is busily collecting water in its tiny beak and trying to put out the fire drop by drop. It seems a pointless task. The other animals ask the hummingbird what it is doing. It says, without stopping, "I'm doing the best I can."

Oooby is a great example of the hummingbird. Eating out of our own backyards is really the best thing we can do for the soil, for others, and for ourselves.

Thanks for being a massive harbinger of hope and keep up the good work!
xohana

80 minutes running time with 2 hours of extras including extended interviews with permaculturists, organic growers and ecologists.