Getting rid of those plant-sucking insects 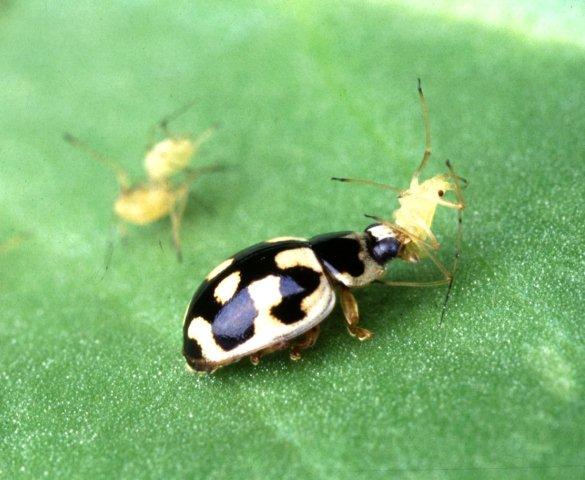 When Ooooby-versity started we were asked what subjects we wanted to learn more about. My immediate reaction: aphids.

My fast response time was rewarded by being assigned the task of researching aphids and reporting back to the group.

My learning curve was rapid. I have always thought the word aphid was a generic term for parasitic insects that feed on plants. But in reality aphids are a very particular type of insect, and there are many others that will live on your plants and feed off the sap. Common ones in Auckland include mealy bugs, midges, scale, thrips, mites, leaf hoppers, whitefly, and green vegetable bugs.

And most of these seem to live in my garden. On the bright side, sucking insects don’t seem to be as destructive as slugs or caterpillars which will literally eat a plant to death, whereas the suckers leave ugly deposits, sometimes holes, and stunt growth, but often not much more.

Aphids, according to the information I found, are easy to spot because of their bright colours, ranging from yellow to green to black. They are usually 2-4mm long. Aphids often cluster on young shoots and flower buds or underneath older leaves. Signs that aphids have fed on your plant include: stunting; curls and folds in the leaves; leaf discolouration; dieback or "flagging" of new leaves or newly formed terminals and branch-ends; early leaf drop; ring-like swellings or knots at nodes and buds; and, like most other sucking insects, sooty mould and other deposits – this black soot-like appearance grows thanks to the honeydew excreted by aphids. Ants like to eat the honeydew, so an increase of ant activity can follow sucking insects.

Mealy bugs look like mini slaters with a white fluffy coating. Tell-tale signs on your plants include white fluff on plants and sooty mould.

For the next four suckers, I couldn’t find any accurate descriptions to help identify the insects themselves, but the web is full of information on the damage they do. With midges, look for trails or indentations on leaves as a sign that you’ve got them. Scale leave white patches on stems or pink or brown raised dome-like structures which measure about 3-5mm across on leaves and stalks. Once again, sooty mould means ants have been eating the honeydew scale leaves behind. And scale can also cause death of the plant if the infestation is heavy. Thrips eat the top layer of leaves, causing browning of petals and fruit. Mites make leaves look unhealthy and dusty or speckled. Heavily infested plants may become covered with fine webs, and leaves may dry up and fall off.

Leaf hoppers are a big problem in my Herne Bay garden. These look like brown-grey mini moths, and young leaf hoppers (known properly as nymphs) tend to have tufty tails. Leave hoppers will jump away quickly when disturbed. Signs that they have been sucking your plants include mottling of leaves and black sooty mould fungus.

Whitefly is another one that thrives in my garden. These ones resemble tiny white moths with a wingspan of 3mm. If the plant is disturbed, a cloud of tiny insects fly out but they soon settle back onto the same plant. Damage could include: wilting and stunting of new shoots; silvering and yellowing of leaves; uneven ripening of tomatoes; sooty mould; and sometimes plant death.

Green vegetable bug is easy to spot. It’s a bright green, shield-shaped insect. It can cause: beans to shrivel and become deformed; the kernels of corn shrivel; and on tomatoes and tamarillos hard, corky growths appear where the fruit has been pierced.

How to deal with sucking insects?

You could start with encouraging good predators into your garden. Insects that will eat sucking insects but not damage your vegetables include: ladybird; wasps; the whitefly parasite delphastus; green lacewings; damsel-fly (which looks like a dragonfly); hover flies (they look a little like a small, hovering wasp); and praying mantis. But just how do you encourage these to thrive? None of the books or web sites I consulted had any suggestions.

Companion planting is always a good strategy. Plants that are said to discourage sucking insects include: nasturtiums; pyrethrum; garlic; nettle; basil; and wormwood. Can anyone post a comment on how effective these plants are?

Here are some insect-specific remedies: Squash aphids – sounds like a helluva job, but apparently people enjoy the quiet pleasure of slowly picking off and killing those nasty insects. Pick heavily infested shoots and drop them in bucket of soapy water, which will remove the affected area from your garden and instantly kill the infestation. For leaf hoppers and green vegetable bugs, use derris dust, which is made from plant-root extracts. A word of warning: derris dust is only toxic to fish, so don’t use it if you have a pond. For mites, flowers of sulphur help acidify the soil, which the mites don’t like. For mealy bugs, brush on meths.

Now, according to all the advice, the only sure-fire way to get rid of sucking insects seems to be to spray. And this is something you have to be patient with – multiple and regular spraying will probably be required. All of us Oooobsters want to be organic, of course, so natural sprays that are recommended are: those made of plain soapy water; rhubarb; garlic; pyrethrum; buttermilk; or even plain ice water. I won’t give any specific recipes here, but advise that you Google them and you’ll find instructions for mixing concoctions on the internet.

None of the literature I found during my research mentioned neem oil, though we’ve had some success with it in our garden.

Personally, I’m not totally opposed to chemicals. If I’ve exhausted all other possibilities I would rather hit the pest problem hard and get rid of it, and then have a long withholding period before I eat produce from my garden again. Browsing the internet for information about commercial insecticides aimed at sucking insects, I found most local products to contain diazinon, which has been banned for domestic garden use in the US. Apparently whitefly can build up resistance to sprays, so one company recommended alternating types of sprays.

To end on a slightly defeatist note, it seems to me another problem is that in heavily built-up areas like Auckland’s inner suburbs, even if you rid your garden of sucking insects, there is likely to be a colony in a neighbouring garden and they’ll soon move back in. So maybe a conversation with your neighbours and some advice on how to get rid of their pests would go a long way to protecting your plants. And what’s more, the secret of successful gardeners seems to be to stick at it and keep up a regular programme of spraying alongside your companion planting and other remedies.

Now I’ll be the first to admit that I have never been good at keeping up a good routine in the garden. I have, however, resolved to try some of those natural concoctions, so I’ll keep you posted on progress via the comments to this blog.

(the photo of a ladybird eating an aphid is by the US Agricultural Research Service, sourced via Wikivisual.com)

Comment by André Taber on August 10, 2010 at 9:52am
Great information, Tony. Thank. Can you share more tips about how to use neem oil judiciously and correctly?

Comment by Tony on August 10, 2010 at 9:03am
Please be aware that 'natural' sprays such as rhubarb, pyrethrum and nicotine are toxic to both problem insects and beneficial / predatory ones, including bees. In an organic system it is counterproductive and shortsighted to nuke all insect life with such sprays as the first to return will be those at the bottom of the food chain who are normally those causing damage to the plants.

Neem oil is a great insect control spray but should be used judiciously and correctly to prevent resistance building up. Some cheaper formulations are less effective and contain chemical extractant residues whereas commercial grade Neem such as NeemAzal TS is free of contaminants and contains the full 60+ active ingredients so far identified in Neem.

Comment by Susan on August 9, 2010 at 9:44pm
Thank you for sharing your research Andre.

Comment by Michael Hogan on August 9, 2010 at 7:19pm
Great photos. Nicotine and garlic are great killers of these suckas. A liquid extract of these in a spray bottle will do the trick every time. Lots of good organic options on the market now. Cheers

Comment by Kate Flint on August 9, 2010 at 12:08am
Always leave old, going to seed brassicas in your vegetable garden... just one plant will do.... as all the aphids will make a bee line for that plant and leave your young seedlings alone. To attract ladybirds, be sure to have a good number of native plants near or around your vegetable garden. Copy nature.... and keep everything in balance.

Comment by Pete Russell on August 8, 2010 at 9:28am
Hmmm. The photos is still not showing on the front page. Could you try pasting the image into the top line? Don't worry about the 'edit post' 'edit your tags' and 'delete post' getting in the way because no-one else can see that except you and me.

Comment by Lisa L on August 7, 2010 at 11:20pm
Great work Andre, I'm trying a natural product called aquatics for leaf hoppers and it has helped with the sooty mould so will see if that means the bugs have gone in spring. 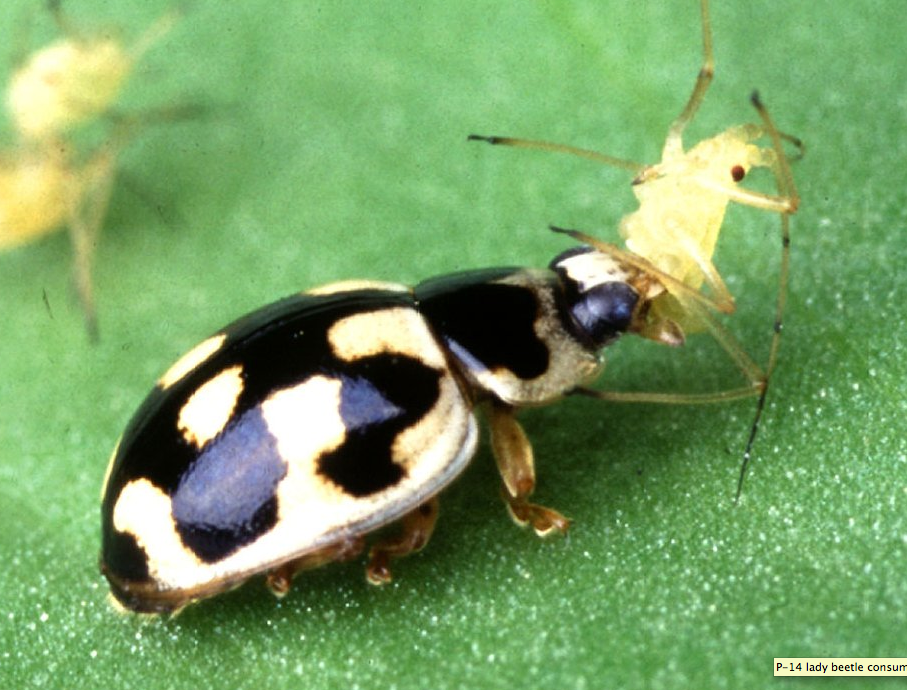 Comment by Pete Russell on August 7, 2010 at 10:54am
Awesome post Andre. Thank you. If you add a photo of a sucka to the top line I can feature it to the front page.