The Story of Ooooby

Ooooby began as an idea in response to the overwhelming evidence that our modern industrial food systems are causing more damage than they are worth.

At the time I was in the industrial food business myself, importing frozen breads for distribution through Australian supermarkets, and making a decent profit for my part. It was only when I was confronted with information showing that I was participating in a system which was responsible for many of our social and environmental problems that I began to take a new path.

The shift happened shortly after moving from Australia to New Zealand in 2008. I had made the move with the intention of exporting New Zealand food to Australia and Asia.

Shortly after arriving in Auckland I attended a presentation by Sue Kedgley, a Member of Parliament with a particular political interest in food.
I imagined that the talk might have been about New Zealand's national strategy to develop their food export opportunities. Little did I know that Sue would soon introduce me to a whole new way of looking at the game I was playing so well.

Sue had recently returned from being the NZ delegate at the World Food Forum held in Rome, April 2008.

This was a high level conference attended by over 180 member countries in response to an accelerating increase of reports which suggested a global food crisis.

Sue presented credible evidence that we are in fact entering a global food crisis and that the globalised food system was doing a great deal of damage in the social, economic and environmental arenas.
As I sat in the community hall listening to Sue's talk, it occurred to me that the chronic ills of our current food situation were caused by models and systems that had been built by people, like me, in pursuit of an evermore efficient and lucrative way of providing food to the people of the world.

As you can imagine, Sue's presentation was not the sort of information that I was looking for. In fact, if I chose to acknowledge her information, it posed a dilemma for me. Do I ignore this information and put it down to leftist sensationalism or do I take the bait and look further into this inconvenient proposition?

After a few months of investigating the current global food situation, I became convinced that local food systems are the way of the future.

Failing to persuade my existing business partners to change course toward local food, I chose to take a leap of faith and embark on a new venture by starting Ooooby.

Over the course of working on Ooooby and its associated projects, I have come to understand a little more about the nature and state of our global food situation. In a nutshell, here is what I have discovered.

1. Our many diverse local food systems around the world are rapidly being displaced by a globalised and centralised food system.

2. Locally owned, polycultural farming has been diminishing at an accelerating rate over the last 30 years in place of large corporate owned monocrops. Locally owned food producers and retailers are also being displaced by the same system.

3. The Globalised Food System sees the world through a 'one big farm' paradigm. We grow all the oranges in Brazil, all the bananas in Ecuador etc. The ecological problem with this paradigm however is that our ecosystem is built to a certain scale. For example, bees can only fly so far and companion plants can only give benefit within a local proximity. So it doesn't work long term (or at least not until bees develop the wingspan of a 747).

4. The counteraction to the problems caused by this ecological imbalance is the use of petrochemical pesticides and fertilisers which are in turn causing untold environmental damage.

5. Local Food Systems are an integral part of the social and economic fabric of a region. So not only does a community lose its ability to feed itself, it also puts its economic welfare at risk. More and more countries are now finding themselves in the position where they can no longer turn back and they can't afford to keep going.

For all these reasons and more, I believe that we are at a point in time when we need to rethink and rebuild our food systems.

Long term provision of nutritious foods to every human is a vision that cannot be achieved by our current means.

To achieve this we need to relocalise our food systems by addressing our staple food provision at a community and regional level and to also support communities from all around the world to do the same.

The good news is that a global unified drive to rebuild our local food systems has been slowly gaining momentum over the last few years and is now expanding rapidly throughout the world.

Millions are returning to their own backyards and embracing the once declining skill of food growing.

World leaders including the Obamas and the Queen of England are heralding the need for us to get our hands back into the soil to provide the nutritious foods that have been so sorely lacking from our processed and packaged supermarket diets.

Ooooby is one of the many initiatives working arm in arm toward local food independence globally.

Ooooby is a lifestyle philosophy embodied in its acronym. It is a wholesome food lifestyle with family, neighbours and friends.

To join this fast growing network of people and to show your support of this vision come and join us here.

(click on the share link below to forward this to your friends or copy and paste into an email.)

Comment by Chris Fortune on October 8, 2009 at 2:58pm
Great to hear the background of - it is not that hard, it is just that we have all been side swipped on the way to ultimate consumerism, i want, i need, i must have 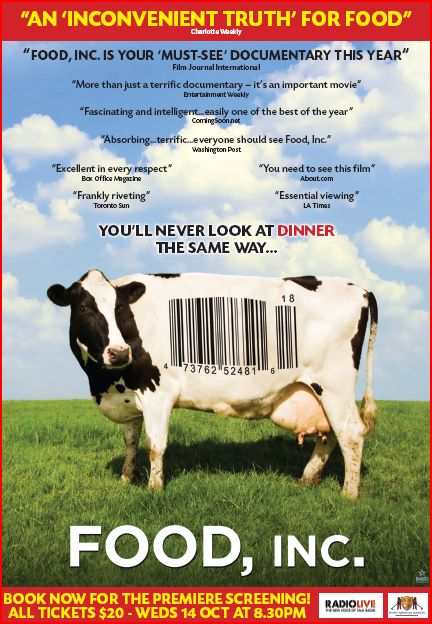 Comment by Dave Russell on October 8, 2009 at 2:31pm
G'day Pete, Great words. I look forward to seeing you in Aus soon. Dave

Comment by Ariane Craig Smith on October 8, 2009 at 11:51am
Thank you Pete for sharing this experience - and not only sharing it in words, but putting it into action through Ooooby and reminding us all that we are a part of the solution. It is action that is required from all of us to change the systems that have unwittingly been driving our societies into states of unsustainable stress, and although there are many concerned people out there, not everyone knows what action to take. Gardening and food growing are such a lovely example of how the solution can actually be something that is a positive and enriching experience - rather than having to 'give something up'!

Comment by Cynthia Chapman on October 8, 2009 at 11:49am
Hi Pete, Thank you for sharing your experience with us. My thought/life changing experience was participating in a PDC earlier this year. I have done my own research since and am shocked to discover that the beautiful food producing island I live on (Tasmania) exports 90% of its food production off the island. So most of our ' fresh' produce is imported from the mainland or o/s. In fact containers of vegies come from China and are sold for a lower retail $ than locally grown produce. As consumers we don't see the 'costs' to the environment, to our own health and to the health of the farmers who grew this produce far removed from us. I am uplifted by seeing a resurgence in relocalising our food production (and our communities) being driven by forward thinking individuals, organisations (Transition Towns for eg.), on line networks and by us, as individuals. Thanks for providing a forum which allows us to share knowledge and ideas and thereby rebuild a sense of local community as well as creating a global sense of community. Let's get growing!

Comment by Vincent Dickie on October 8, 2009 at 11:48am
Great piece Pete and some fantastic observations and insights. I too came from a commercial background (studied economics, marketing and worked in law) and had a similar awakening.

From all the information I have studied and collected over the years, I have concluded that things must return to a human (read: natural) scale. It seems the only way through the collective nightmare that is wreaking havoc on our ecosystem, and not to mention our own health.

This is why I now choose to work with communities as I believe re-kindling community spirit is key to the change. For myself, climate change or no climate change, all the debates, statistics and figures no longer matter to me. You just need to open your eyes to observe the effect our actions are having on our environment. Most people - rich or poor, know instinctively (even if they don't admit it) that we are living in an imbalanced world.

The great thing is that we needn't despair, there is positive work to be done whether it's growing your own vegetables, walking to work or setting up Ooooby!

As a Chinese proverb says: 'May you live in interesting times' - and that we do!

Love your work Pete. Hold strong to your vision.

Comment by Isa on October 8, 2009 at 11:39am
This is great. Thanks for putting your energy into a great project with socially responsible principles. I hope more industry people follow your lead and get their hands dirty. Creating local productive ecosystems is probably the most accessible and feasible way of ensuring sustainable food supply for communities. I did wonder why Oooby has a corporate look to it that most hippy groups don't seem to have - but if it appeals to people and gets them involved then it's fantastic!

Comment by The Dinner Garden on October 8, 2009 at 9:21am
Interesting article. I love it when something totally changes my mind and gives me a whole new perspective. What an awakening that talk must have been!

Comment by Margaret Beers Oliver on October 8, 2009 at 2:56am
Helen, I think we have all become a bit "spoiled" with the availability of out of season and imported produce. I know that my children have never experienced seasonal eating until I exposed them to the idea a few years ago. They still think I am a bit crazy, but I survive the taunting. As we are heading into winter here, my season has slowed way down. I am doing some indoors container gardening, so I have a real jungle planed for the house. LOL I know that people think I have gone a bit batty, but I feel better about my chances of helping the world get past the dangers we have created for ourselves. Pete... thanks for taking the time and making the effort that has opened the eyes and hearts of so many.