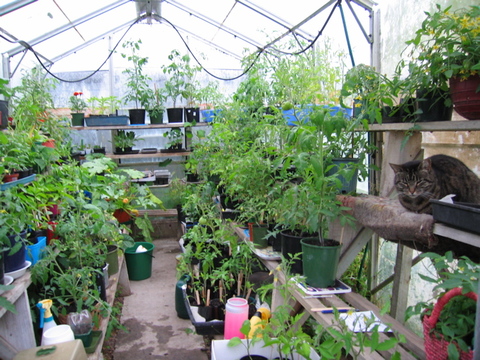 I've been out in the glasshouse this evening, watering the plants with their weekly serving of comfrey, seaweed and blood and bone.
I have each of these brewing in its own barrel and I top them up with water as I use the liquid.
Tonight I really enjoyed concocting the 'brew'-there's a certain 'white witchiness' to it. It's not an exact science for me. I just make sure each addition would qualify for the description 'the colour of weak tea'. This is what I've read in the many organic gardening books and magazines I habitually enjoy.

I usually fill the bucket about halfway with the seaweed brew and then add a fairly weak, old, comfrey brew to about the three quarter depth.Then I throw in a couple of deep cottage cheese containersful of newer, stronger comfrey liquid and one of the same measure of the blood and bone.
This seems to work well. All the plants in the glasshouse are thriving on it, including some poor specimens that badly need potting on. They manage to look reasonably healthy, despite their plight.

After I had watered I decided to spray some of the plants with Neem soap mixture because I'd noticed that they were overpopulated with white fly and aphids.
As I worked I was odserving what insects were on the plants and in what quantities. I think that this careful observation is part of being an effective organic gardener.

I believe the key to a healthy garden is balance and I like to have predators working as the main form of pest control.
For this reason I need to have some garden pests for the predators to eat. This won't work if I'm just replacing chemical sprays with organic sprays. Quite a few organic sprays are toxic to helpful insects too.
Reading as much as I could find about different organic sprays, was very helpful when choosing the ones that suit my goals in the garden.

It can take a few years for a population of predators to move back into a garden that has been sprayed with chemical sprays and also for the soil to become healthy. Organic sprays are a useful tool. Careful observation helps a gardener learn which ones to use and when. Everyones garden has different conditons,so learning about what works in your own garden is an important factor in successful and enjoyable organic gardening.

As I sprayed the soapy liquid on the leaves of some eggplants and peppers I noticed that there were also some mummified aphids-these are black and swollen. This kind of observation makes me wonder whether I want to spray these plants-will the baby predators inside be harmed or killed?
Most of the baby praying mantises have grown into adults now, or been eaten by their peers, but there are still a few on the 'buggy' plants. The soap spray doesn't seem to hurt them, however, I don't want to deprive them of all their food either.
Another thing I've noticed is that, with feeding the plants with liquid bokashi and the seaweed,comfrey brew, they stay very healthy and quite often an overpopulation of pests doesn't last. A few days later there may only be a few.

Plants right beside each other will differ too. One may have lots of bugs and the other none. This is interesting because it shows that an infestation won't necessarily spread through all my plants.

It takes a certain amount of gardener's courage to hold back and observe rather than reaching for the spray immediately.
Mostly I've learnt to do this through observation and life experience. I don't always have the time to deal with issues in the garden immediately. sometimes I've been unwell and things get left undone.
Instead of this being a disaster, I've been able to learn what happens next. Sometimes plants do become unhealthy and die (or get eaten) but just as often, in an organic garden something unexpected happens.

One of the really great things about gardening is that it is cyclical and every year I have the opportunity to try again, using what I've learnt from my mistakes, successes and observations.
No wonder there are so many long -lived sprightly gardeners. I think it is a wonderful way to keep body and MIND fit and active.

Comment by Lynda Wood on December 20, 2009 at 10:25am
WOW! Hester, Love the picts of your hothouse,you must gain so much from your gardening, to have as much as you do! You are an inspiration, thankyou for sharing yourself on here

Comment by Hester on December 17, 2009 at 4:36pm
There are some products availiable that contain Bacillus thuringiensis - Kiwicare is one.
BioGro certified organic biological control of caterpillars and other leaf eating insect larvae on fruit, vegetables, ornamentals and other plants. Not harmful to beneficial insects or plants. No withholding period. Caterpillars controlled include leafroller, looper, white butterfly, diamond-back moth, tomato fruit worm and fall webworm.

Comment by Yvonne Nikolaison on December 17, 2009 at 2:20pm
I am told coffee grounds are good.

Comment by Maria Wise on December 17, 2009 at 1:50pm
I m look8ing for organic slug catterpilar control on my cabbages and lettuce

Comment by Hester on December 17, 2009 at 8:36am
I found a parasitic wasp i the glasshouse last night but it was dead so I hope she wasn't harmed by my soap
spray. I'll have to do some more research. It confirms my diagnosis of mummified aphids tho' I'm really happy that the predators are coming into the glasshouse. Some years back I used to kill wasps-now I am more cautious. There are lots of different types and most are predators, even tho they annoy us.

Comment by Yvonne Nikolaison on December 16, 2009 at 10:25am
Thank you Hester I will see if I can still get a copy. Many thanks

Comment by Hester on December 15, 2009 at 5:42pm
Yvonne-a short answer for now-I find Organic NZ magazine very helpful and the November/Dec issue has a big section on insect pests and predators plus organic sprays.

Comment by Kali on December 15, 2009 at 1:25pm
wow your glasshouse is so tidy Hester, do you keep the tomatoes in pots all summer? makes me feel not so guilty about never spraying! even with organic concoctions. I can't seem to get around to spraying my fruit trees and berry bushes at the right time so they have to fend for themselves. I just topped up my barrel of comfrey and seaweed tea, was looking a bit weak, the rain has been getting in. Great points about the predators also being susceptible to the sprays, I am definitely becoming more observant of which critters are active in the garden, adds to the wonder of the garden.

Comment by Robyn Wolfe on December 15, 2009 at 11:10am
That hothouse is looking so good! And I love the cat...
You have written so much that will help others. Thanks for the effort and well done!

Comment by Yvonne Nikolaison on December 15, 2009 at 10:23am
I loved reading this Hester. Because I am a newbie I panic quickly I guess, but then I am wanting the harvest for more than now, so I feel a little pressured. Guess I should take a leaf out of your book and do the wait and see thing. Can you point me into the direction of a good organic spray resource please?