Today was a glorious sunny Spring Day, after a few cool grey ones.
We had an extra special occurrence in our garden.
In the early afternoon I looked out of our upstairs window and was amazed to see a cloud of flying insects above the trees.
I called out to Mr Box to come and see. Then I realised I was seeing bees.
A swarm. 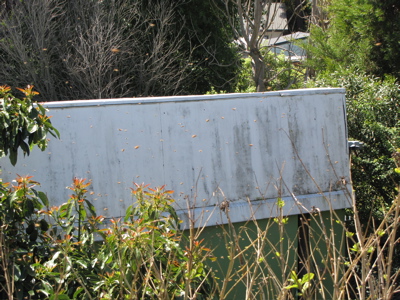 I was very excited. I’ve never seen bees swarming before.
Mr Box said to keep an eye on them and that they would probably fly away.
I stayed in the house, glancing out of the window frequently.
After a while I noticed that there wasn’t such a wide spread of flying bees. They were concentrated in an area above our lemon tree, and there were not so many in the air.

I ventured outside to investigate.
Cautiously I approached the lemon tree from the far side. As I drew near I coud see a mass of bees in the tree. The swarm had settled.
More excitement. 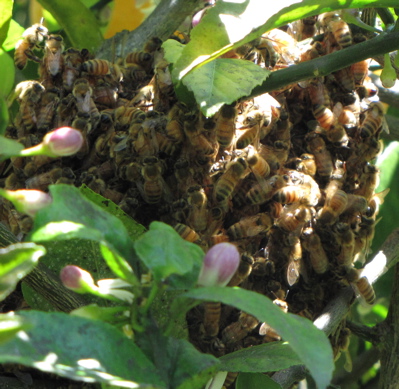 I really wished we could keep them but we had nothing suitable for a hive and would need to be more prepared.
So I phoned our regional apiary, Arataki Honey, and asked if they could give me some contact phone numbers for any local beekeepers who might like to take them.
The woman who answered my call had the information to hand. They obviously have a lot of similar enquiries.

After a couple of phone calls I had made contact with a beekeeper who lives in our village. He would be here in ten minutes.

Dave arrived promptly, with his daughter, and followed me to the back garden to
check out the bees. 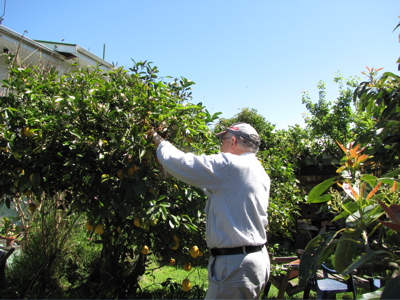 He surveyed the scene and went back to his vehicle for a box.
I was surprised that he didn’t have beekeepers clothing and a smoker, but was wearing thin clothes, with bare hands.
As he trimmed a couple of small branches from the lemon tree to provide easier access to the bees, I asked why they didn’t sting him.
He explained that they had no hive to protect yet and so would not sting him.
He then got a cardboard box that was fitted with a taped on sliding lid. 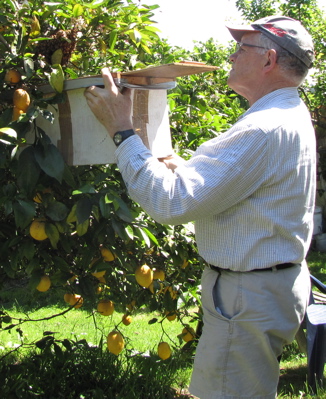 Dave had left behind something that he normally used next-a spray to discourage the bees from returning to the branch.

He asked if I had any aerosol air freshener that he could use instead, but I don’t use it. I only have a natural lavender oil in water spray, but he said that the bees would probably love that!
Dave explained that the box had had bees in it and hopefully the swarm would like the smell and stay.

I asked him what the bees would do if no one came and captured them.
He showed me how there were scout bees still flying around looking for a cosy place for the bees to make their new hive. They would probably take a liking to somewhere like an upper corner of my potting house, and move in there.
Much as I love bees, I don’t think I would share my potting house with them, and I rather suspect they would not want me in there with them, either.

After the Bee Motel was firmly established in the lemon tree, Dave said he would go, and return in the late evening when the bees had settled down for the night, to take them to his home.
He said he would isolate them in a hive away from his existing hives until he was sure they had no disease or varroa .

I carried on with my day's activities in the garden, enjoying having a temporary beehive in my backyard.
I have so many plants that bees love. It is, perhaps, not so surprising, that they chose to settle here.
I do feel very honoured that they graced us with their presence, and rather sad that I wasn’t able to provide a home here for them, in return.

As the day drew to a close I noticed fewer bees outside the Bee Motel.
I went closer to see what was happening.
A few bees were going in and one or two still flew out now and then.
The box was very quiet and I was surprised at that. I thought it would positively hum.
I wondered if the bees had gradually flown away during the afternoon with out me noticing.

Dave came back before dark.
I told him I wasn’t sure if the bees were all in the box but he said it felt heavy enough when he lifted it out of the tree.
The bees had settled down for the night.

As I said goodbye to Dave and the bees he gave me me a pot of his honey. It sweetened the loss.
I hope the bees will come back to visit our garden when they are out foraging for food.

Amazing story Hester! how lucky for you to have such a fine visit to your backyard and no dobt they had a feast while there! : )

The beekeeping organisation that David belongs to would like permission to reprint your blog entry above in their branch newsletter. If that is ok with you I will drop you a message with the contact details of the editor.

This is a beautiful story, Thank you for sharing! It made me feel a little emotional for some reason; bees are so amazing and important.

What an awesome story Hester! Magestic creatures aren't they. I love sitting and watching them in my borage plants. Thanx for sharing

Comment by Grant on October 31, 2011 at 8:47am
Great blog. Ever thought of giving backyard beekeeping a go yourself?