Right now, as the rain falls again, one of the ponds is about to over top and two others are more than half full. We even have a good chorus of Green and golden bell frogs ribbiting away in the evening air. Brilliant. Here are the before and after shots. 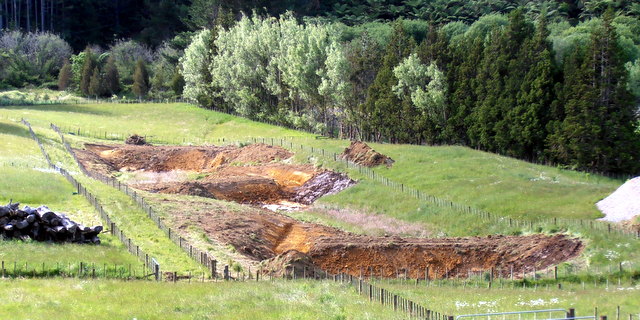 Except that we are now well behind in the planting plan. We threw in some rye and clover to try and get some ground cover on the exposed soil and added some flax, manuka, pittosporum, rewa rewa around the banks to try and stabilise the loose material. They are looking much softer already with the good rain we have had.

But now we need to get to work at the water's edge. We want to add both fish to keep the mozzies under control (and possibly provide some food) as well as edible plants.

Does anyone have any experience with these, or any other edibles in ponds, especially with invasiveness and escapees?

Malcolm at Wrights Watergardens suggests brown goldfish which are endemic in NZ waterways and less likely to be taken and has at least some of the above. But for others we need a supplier, any takers or suggestions?

Thanks Chloe, for both comments. The cattail is also Raupo which we have in mind, BTW, the pollen was used by Maori to make very high status bread; I'm guessing its hard to collect and there ain't much of it.

I don't have an answer for you but am interested to see if someone else has. We converted a boggy area to a pond about 25 years ago and were keen to have fish for eating but after some research put it into the too hard basket.