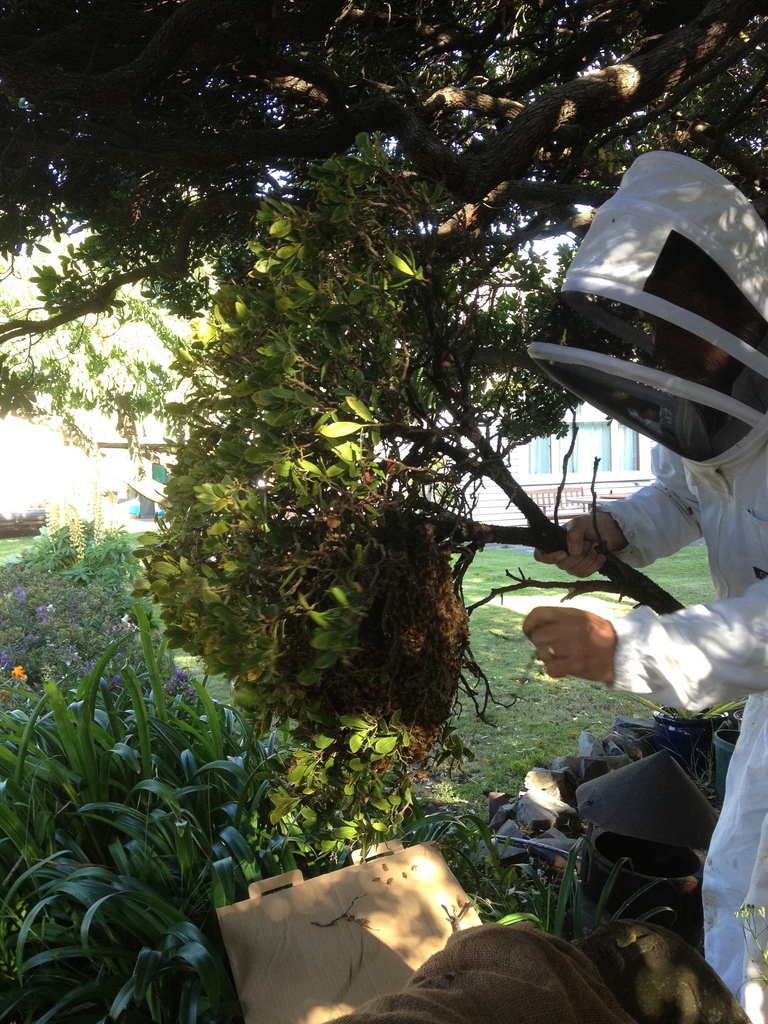 I've already shared a little about our bees and catching a swarm. so this is a kind of update but a lot has changed since the season started. We have now collected a second swarm and we are experimenting with three different kinds of hives. I thought I would journal some of our learning curves.

As far as our other hives are concerned we have had a lot to think about. So I will introduce  you to each one individually. In an earlier blog I wrote about us catching our first swarm of bees. Initially we were not sure whether the swarm had come from our hive but we suspected it may have. Since this blog and many inspections later we did conclude that it had. This has produced many questions for us and also given us a lot to learn.

Reading on Ooooby about Top Bar Hives got our interest up and I suggested to my son that we make David a Top Bar Hive. As it happens this has been a very cheap experiment and we have made two of these types of hives and one is now inhabited with bees thanks to a my husband driving through a swarm of bees. Our Bee Motto is now to always be prepared.

The latest Beekeeping Journal suggests that eventually Top Bar Hives will be required to have frames so we decided to bite the bullet and make the frames according to the instructions in the magazine. I have listened to a couple of Top Bar Hive people grumble about whether it was necessary and I have listened to beekeepers who have inspected Top Bar Hives who have felt that it would make life easier and so we decided that we would make them.  Having just done the DECA course I am pleased that we have put the frames in because I am the one who is going to be doing the inspections and feel very new to everything and want to be sure I get it right.

We caught the swarm two Fridays ago. By the following Wednesday the bees had pretty much filled out four frames and upon inspection last Sunday we found the queen moving about doing her business. It is all very exciting. We decided on Sunday to give the bees a few more frames as we want to encourage this hive to get producing honey as well as making brood. In our reading they say that the Top Bar hives don't always produce as much honey as other hives can because the bees have to work so much harder making all of their own foundation but when we look at how quickly they have filled out four frames we can't help but think this is going to be a great season. I marvel every time I think of how these bees have produced such beautiful honey comb.

We bought a nuc this year to trial a new hive, as it is a trial we don't really want to share to much about it until it has been tested but at this stage we can say we are very happy with it and are excited about its possibilities. The bees are doing well and we have appreciated the email assistance from Nick who sold us the nuc.

The swarm hive has done very well, we have seen the queen and she has been very busy laying eggs and there are frames full of brood so we are really pleased with this hive. David listened to a commercial beekeeper at the bee club last week and watched as he made sure the queen was in the bottom brood box. He moved the queen excluder down on top of this box even though there is brood in the box above. He said that the brood above would hatch and the bees would clean these frames out and use them for honey so we are trying that too.

This hive has produced for us the most challenges and also the opportunities to learn. After the catching the swarm which is now Hive No 2 we inspected this hive to see what was going on. We found the hive busy but considerably smaller and there were several queen cells. We concluded that the swarm we caught had come from here. We couldn't find a queen at any stage and slowly the hive got angrier when we went to check up on it. From discussion with different people we decided that the weather had hindered the queen from mating so we purchased a queen at the same time we bought a nuc for another hive. (Hive No 3). We placed the queen into the hive and hoped for the best. Unfortunately for us we think the virgin queen killed her as she tried to emerge. When we inspected the hive a couple of weeks ago there was no sign of a queen, no new brood, except for the odd drone cell. Clearly sign that something wasn't right with our queen if she was there at all. Here was a hive with two almost two boxes of honey and no sign of a future. What to do?

Whenever we are lost for answers we take to the internet. I just typed in a question something what to do with a virgin queen, or something like that. I came across an article that seemed like a sensible idea and we decided to give it a go. I also emailed the beekeeper we bought the queen off, knowing full well he would be able to advice us as to what we should do next.

The internet solution seemed very instant and promising so we thought we would give it a go. The advice was this. Move your hive 50-100 metros away. Shake out all the frames and take them back to the original place where the hive was. Add to this some capped brood along with newly laid eggs in the hope that the bees would raise up a new queen. Well I somehow missed the part where it said that the frame of capped brood and eggs should also have some nurse bees on it.  (We had removed all of the bees when we put it into the Hive 1 box.)

We shook out the bees. Most of them rushed home. Some took a while. The article said that the virgin queen or worker bee queen or whatever it was won't have flown before and won't be able to make its way back. By early evening most of the bees had returned. We were aware that the hive was quite vulnerable and were nervous about the whole thing but something had to be done.

As it happens one week later when we inspected the hive the bees were happier and seemed very settled. Taking a closer look we have found queen cells on the frame we have put into the hive. What a relief! The email back from the friendly beekeeper who had supplied both our queen and the nuc for Hive 3 had suggested that we combine the hive with another, layering a piece of newspaper between the two hives. He said that it had been a big problem this year and even the most experienced beekeeper mightn't have been able to spot the virgin queen that was causing all the problems.

If everything turns to custard with this hive we may still have to combine it with another but we are ever hopeful that weather will remain consistently fine long enough for our future queen to mate and start laying eggs.

The whole process is a bit of an adventure and we are loving it. We have done so much reading and the mysteries of beekeeping are slowly unfolding for us. We have a little more confidence that if we needed to maybe we could raise our own queens. I have moved from audience to full participation. I started off quite happy that David had bees and now I carry the responsibility of checking the hives for diseases. A few years ago I would never have thought I could have got so involved.

It is great to read what is happening in the Bee Group and learn from what others are doing. It is encouraging to find people on similar journeys and its always good to read the more experienced beekeepers comments. So thank you to all beekeepers out there.