I can't believe I just did the same clumsy thing for the second time in a week!
I was watering the seeds germinating in the glasshouse and I picked up a punnet of pepper seeds out of a propagator, so it would be easier to water.
Somehow I didn't manage to grasp it properly and it spilt, tipping out at least half of the germinating pepper seeds, into a nearby pot, the base of the propagator, and, worst of all, down under the glasshouse shelving.
Aaaaargh!!!
So once again I considered the options-start all over agian with new pepper seeds and lose about 3 weeks growing time OR scrabble in the spilt potting mix and very carefully rescue any pepper seedlings I found.
Option two won and there I was crawling under the glasshouse shelving again.
(Anyone who saw me squeeze into the chicks' run yesterday would have been convinced I am mad.)
Anyway here is what I salvaged: 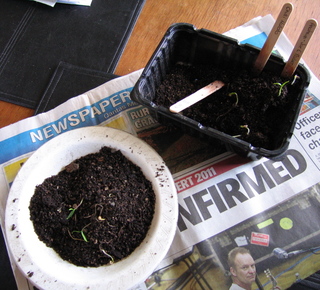 And here is the punnet at least ten minutes later. After some work with fresh seed raising mix, a pencil dibber, toothpick and very careful fingers. Some of the seedlings are too little to surface yet, but they're in there. And no, I don't know which seeds are which any more, so I'll have to wait until they have peppers on to find out!
Here's hoping I don't drop them again.