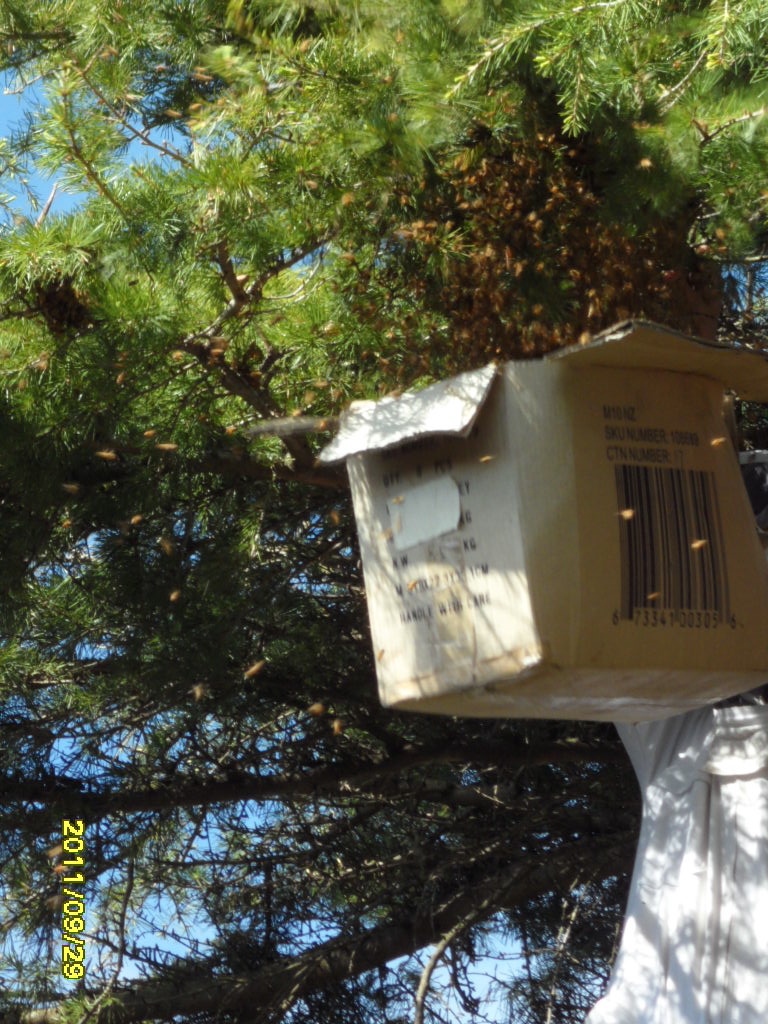 We started off with two langstroth hives. That is what the beekeepers say to do. You can monitor the hives and compare them and you soon know if one is doing better than the other. We were late gettting going into the season last year and bought the hives and nucs middle of October. At the end of the season we were please with the 20-30 kilos of honey, even if we had hoped for a little more.

Then winter came, one hive did not survive. It was the weaker hive and hadn't done particularly well compared to the other. Whether it was because the queen was older or whether we should have closed the hive down a bit more to keep the hive warmer we don't know. It's a learning curve. The hive that made it though winter has been going really well. We had a new nuc ordered for the empty hive and then there was a swarm of bees. How exciting!

David had been on night shift but I woke him anyway. I didn't think he would want to miss the opportunity of collecting a free hive. It took him several trips up and down the tree to collect the bees but it went really well.  It may not have been text book technique but he tried to apply what he had learned at the beekeeping club. One of the things that surprised him was how heavy a bunch of bees were when it landed in the box. When bees are swarming you are not really in danger of being stung as they don't have a home to protect so it is a relatively safe occupation collecting swarms.

Swarms are fascinating and when you realise what has been going on before they swarm, you discover just how incredible bees are. When the worker bees decide it is time to look for a new home they make the queen bee run around the hive to get fit for the flight. When they swarm they don't completely abandon the hive. Some bees stay behind to raise a new queen up from the eggs that have been laid. The first queen to hatch quickly destroys other queen cells in order for her to be the only queen in the hive.

We are not sure whether the swarm came from our healthy hive because it still appears very strong but our bees have settled into their new hive very well. The weather hasn't been ideal to check what is happening in the hives as have had quite strong winds and then a cold snap. Also we didn't move the hive very far and found a few bees travelled back to the driveway for a couple of days as though they were lost but the new hive appears very busy. 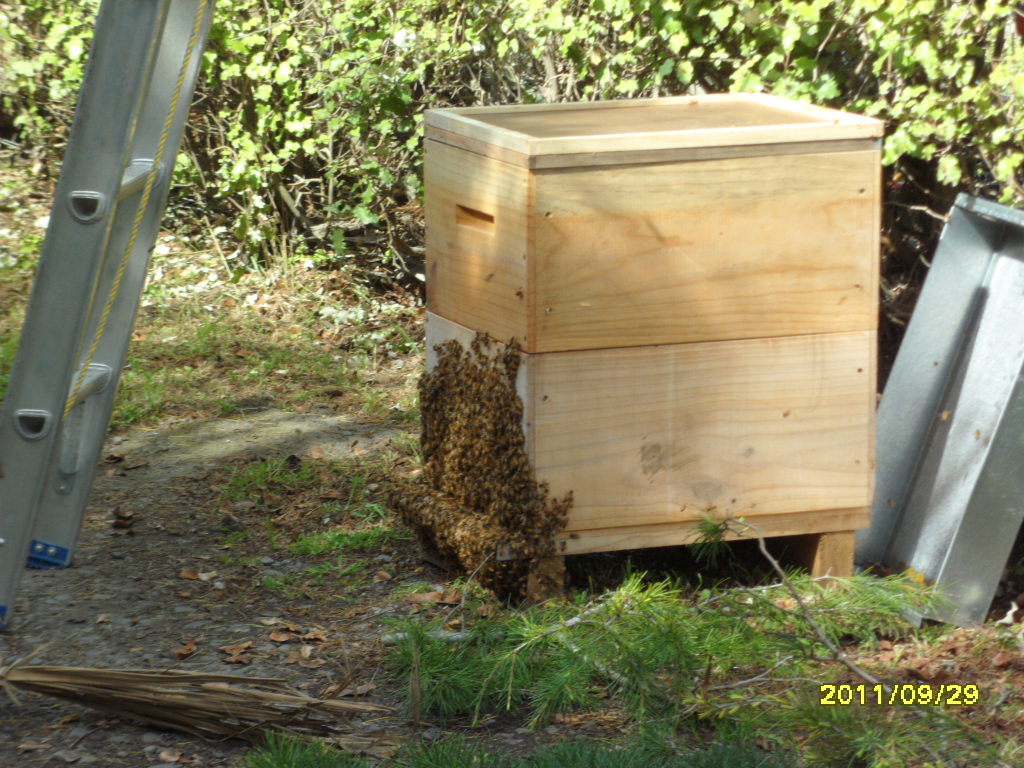 We still have a nuc ordered so I have asked my son to build us a Top Bar Hive so we can compare how bees do in different types of hives.

I honestly didn't know how I would cope with bees on our property but I soon discovered that we could live side by side quite happily. Their flight path over the vegetable garden caused me to hesitate to weed the garden during the day but I have a veil to put over a hat now so I should have no problems working alongside them in our new garden. We have tried to give them a good few more metres before the vegetable gardens start this time.

When you go outside on a very hot day, and we have had a few already this year, it is wonderful to see bees at work. They are really not interested in anything other that the job they have to do. The honey we collected from them last year has just run out. I think we gave away too much. Next year I want my supply tucked away before I give any away. It may take a few years to recover our original set up costs but we would easily use a jar of honey a week and I love it when I don't have to buy it.

I went on the internet after we had collected our swarm and watched YouTube videos of experienced beekeepers collecting swarms and decided David didn't do such a bad job. If I hear of any swarms nearby from now I will not hesitate to make sure we get to collect them. We just need to stay one step ahead and always be prepared with another few boxes ready for another hive.

Comment by Katherine on October 7, 2011 at 12:58pm
Hi Kali, you made me chuckle! David assured me that bees don't sting when swarming but I stood back with the camera and left it all to him, not completely confident that all would work out as well as he expected.

Comment by Kali on October 7, 2011 at 7:23am
HI Katherine, seems so early in the season for swarms! I have  a little experience with catching swarms, so incredible :) the first one I was holding the box while someone else was to shake the branch to drop the swarm into it, unfortunately I didn't move over as the branch came down and they landed partly on my arm, swarming bees don't normally  sting but they do if you do that!