Here's the place to discuss how to grow fruit and vegetables, including how to improve the soil and the requirements of particular plants.

One of my workmates was asking about the oyster flavoured root vegetable that she remembers enjoying eating mashed: it is salsify.

Kings Seeds sells it and has a photograph:

It is a plant that you can be harvesting at the moment.

Jacob Brown, a chef from Wellington NZ, spoke about salsify on Radio NZ recently - you can listen online.

Download his recipes for Salsify Fritters and Chicken and Salsify Pies from Radio NZ.

What to Grow Over Winter

K’aute Pasifika runs a free group for the elderly and disabled on Thursdays where they do crafts, have lunch and sometimes have speakers or music with dancing (contact Vitinia ph 834 1482 if you know someone who’d like to go).  A few of our WIC members attend.

One of them was asking what kind of vegetables to grow over winter.  The list is long, here are just some of them: 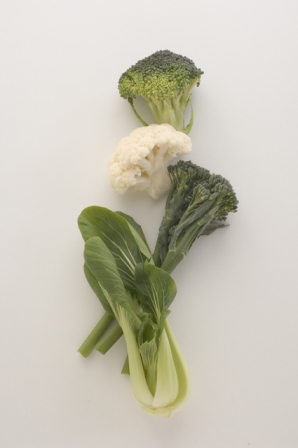 In winter you can also be eating kumara (sweet potato), potatoes, pumpkins, apples, etc that you harvested in the autumn and have stored.

There is a list of what to plant when in the back of the How to Grow Your Own Food book published by the Hamilton Permaculture Trust. Hamilton Public Libraries holds a copy.  There are also a number of online lists, eg at http://www.gardengrow.co.nz/ under the ‘Planting Now’ tab – choose the temperate climate zone if you live in Hamilton, and cool/mountain if you live in Tokoroa.

You may also find the free Get Growing email newsletter helpful, it is put out by NZ Gardener magazine on a Friday afternoon. They tell you what you could plant or do in the garden that week. There are some previous newsletters and a form to sign up on their website or send an email to getgrowing@nzgardener.co.nz

At Grandview Community Garden they have been harvesting peas and lettuce.  Some of the gardeners are still sowing cos lettuce, rocket, pak choi and silverbeet for spring harvest.  With a little preparation and effort, there is no reason to go hungry in a Waikato winter!

Many of the winter vegetables work well in fried rice – one of my favourite quick winter week-night dinners. Cook/serve it with flavourings from the kinds of cultural foods you enjoy, eg Hoi Sin sauce, soy sauce, a mix of chilli lime and fresh coriander, curry paste, garlic (plant in winter, harvest 6 months later)... I’ve put the recipe up on Ooooby under the Eating discussion.

If you are looking for ideas on how to cook your vegetables, try the meals/takeaways at the Vegan Buffet at 148 Ward St, Hamilton City. They have over 20 different vegetable dishes on offer each day! Most have an Asian theme and use common vegetables. The owners are happy to tell you about the different dishes.  The food is priced by weight – an adult portion costs about $9-10. The place was very busy when I visited. 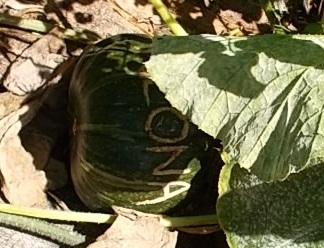 Pumpkins originate from South America, where they were often grown under corn and with beans - a group called 'the 3 sisters'.  The pumpkin vine shades the soil - a living mulch.

They are a curcubit - in the same plant family as cucumbers, gourds, zucchini and melons. They are pollinated by bees.  The curcubit family all cross-pollinate freely – the results can be wonderful or yuck. So unless you live in the country (bees can easily travel 1 km!) or have a good amount of room to experiment, you may be best to buy fresh seed each year.

Pumpkins are grown over summer because they are frost tender.  They take 4-6 months to grow, so you may want to start the plants under cover in pots in September/October.  Plant them outside after the frosts are likely to have finished – no earlier than Labour Weekend in late October.

Pumpkins and squashes are gross feeders (like lots of food), so my mum used to grow hers on a compost heap she’d built up over the winter.

You can keep moving the trailing stems back in towards the plant stem, keeping it within a couple of meters square.  This not only takes up less room in your garden, it also improves pollination (= more fruit).

You can scratch pictures or words into the skin of young pumpkins which will grow with the fruit – Bethy White got each of her grandchildren to ‘claim’ a pumpkin by putting their name on it (see photo above).

Like other curcubits, they are prone to a fungal disease called powdery mildew – it is a white powder that appears on the leaves.  There is more information about powdery mildew and a home made spray you can use to treat it on the RNZIH website – the easiest treatment is to spray with dishwater ie water with a little dish detergent in it.

Not only the pumpkin fruit are eaten: a number of cultures eat the cooked growing tips (leaves at the end of the vine), the seeds and the flowers.

Pumpkins with tough skins can be kept for many months and used throughout the winter – my mum would grow 20-40 pumpkins each summer in a space of about 3 x 2 metres!  One of NZ's favourite varieties for storing is called Crown or Crown Prince.  There are many different varieties.

The pumpkins are harvested in autumn, often after the first light frost when the leaves have died.  The pumpkin should sound hollow and the skin should be hard.  Leave a piece of stem at least 10 cm long attached to the fruit. Keep them in a cool, dry place. 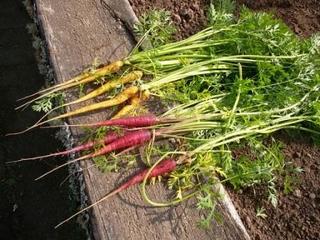 One of you has been having problems getting his carrots to germinate ( = seeds sprout).  Check out Kings Seeds’ latest blog about growing carrots - it has some good tips. 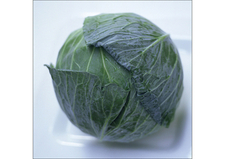 Cabbages are a brassica, and like other brassicas, grow well over winter when the white butterfly and it's hungry caterpillars are less busy.

They like lots of food - mostly nitrogen for lots of leaf, so manure is excellent.

If you are planting out seedlings, take of a few of the lower leaves and bury the plant lower in the soil than it was before - this will help the plant develop more roots and it is less likely to fall over.

A tall kind of cabbage popular amongst the African community is propagated from cuttings – if you are growing them I would love a photo for Ooooby!

If you need less than a whole cabbage for a meal, I’m told you can leave the cabbage growing, cutting out only the section you need.  Cover the cut area with a leaf.  The remaining cabbage will stay fresh until you are ready for it.

If you need to harvest a whole cabbage, leave the stem and a few of the bottom leaves behind to grow a new smaller cabbage or two.

WWOOFing is about an educational and cultural exchange.  It gives volunteers the opportunity live with families and get hands-on experience with organic practices including cooking and preserving, wine, cheese and bread making, companion planting, worm farming, composting and more.

WWOOFers help out the hosts for 4-5 hours per day in exchange for 3 meals and accommodation.  A few places will take families.  So if you want to learn more around organic gardening, consider WWOOFing on your next holiday…

This will be led by organic grower Judy Chrystal who has WWOOFers staying on her farm on a regular basis.

Come along and learn more about WWOOFing! 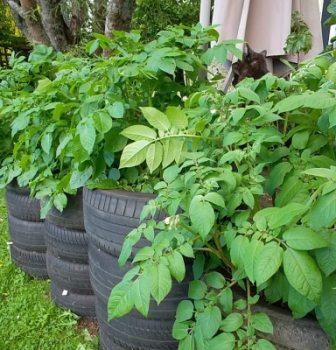 Chitted (or sprouted) potatoes (see  Propagating potatoes) can be planted in large containers, in black plastic rubbish bags (black makes the soil warmer), in a tyre tower (add up to 3 tyres as you earth them up – see below), or in the soil.  They make an excellent first crop for a new piece of garden.  Soil must be well drained and fertile.

In winter if you are planting in the ground, dig the soil to spade’s depth and ideally plant on a bed of compost or comfrey leaves about 8 cm deep. Do not add lime! Plant the seed potatoes no more than 5 cm deep, or place at ground level and cover, creating a ridge (as you would do with kumara) which will be warmer and better drained.  Sow seed potatoes about 25 cm apart.

Plants need regular water to grow large tubers, so if it hasn’t rained for 7-14 days, give them some water.

Once the plants are about 15-20 cm high they need to be earthed up, ie draw the soil up (or use compost) to cover most of the plant, forming a ridge.  This prevents the potatoes from being exposed to light which will turn them green, making them poisonous.  Earthing up should be done about every two weeks.

Potatoes are ready for harvesting when the skin cannot be rubbed off easily or when the tops of the plant have started to wither.  Harvest, or lift, the potatoes in dry weather and leave them on the surface to dry out for a few hours to firm up the skin before storing them in a cool, dark, dry place: a cardboard box or paper bag is ideal. 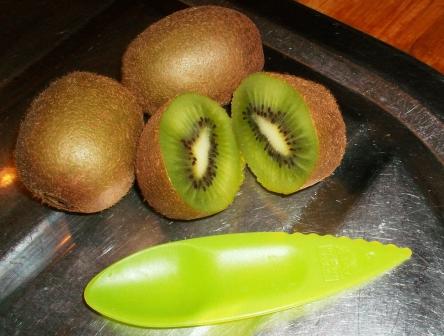 Green kiwifruit generally grow very well in this area and can be grown in your back yard.   It is a vine, so it needs support. You will need both a male and a female plant to get fruit.

The kiwifruit disease PSA has been found in the Waikato. There are photographs of the symptoms here.  If you have a kiwifruit vine in your garden and it is showing these symptoms, please call the Kiwifruit Vine Health team - they need to know, and can give you advice: 0800-665-825.

There is more information about PSA on the ESL News NZ Site.

ESL News NZ is written for people learning English as a second language.  On their web site you can listen to New Zealand news, spoken slowly and clearly, using easy vocabulary, and read along. This can help improve pronunciation.  ESL News NZ also have a vocabulary list with each news story. Blossom end rot (see picture, left, by Margaret Senior) is caused by two things: not enough calcium (Ca) and watering inconsistently. (It is not a fungus.)

You can prevent blossom end rot by:

Not enough calcium will also cause carrots to grow with holes in them.

I've seen several of these vertical gardens made from recycled pallets around Hamilton city.

A cafe uses some as free standing 'walls' that provide shelter to their outdoor customers, while this one brightens up an outdoor staff lunch area - much nicer than looking at a concrete wall!  This would also work well if you only have a balcony space to garden on. 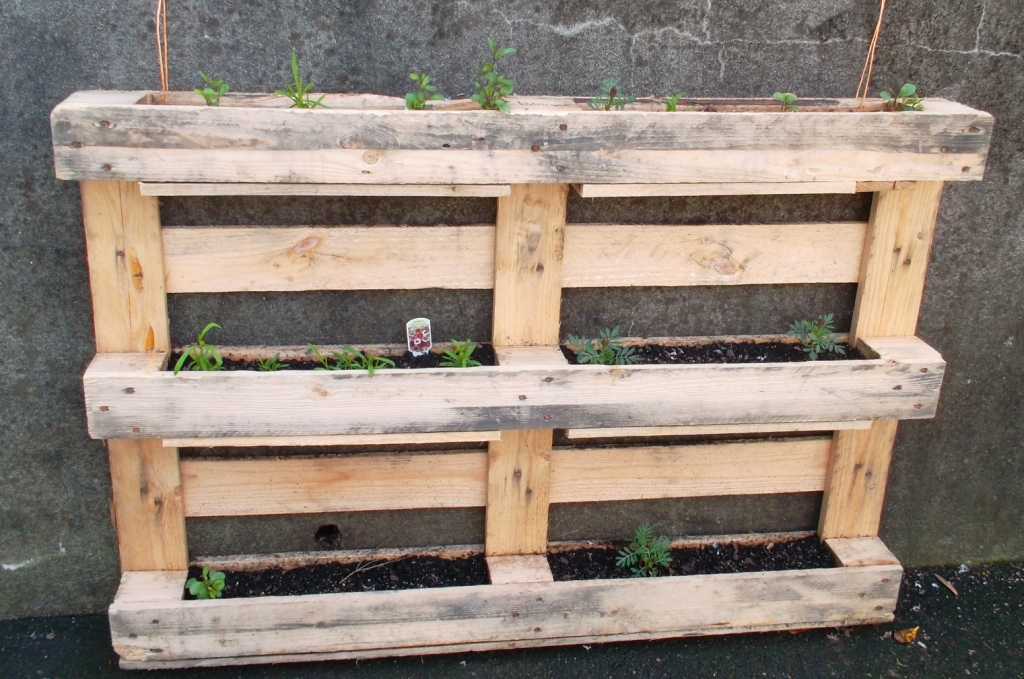 They plan to plant strawberries in the bottom row: it will be easy to attach some netting to the 'shelf' above, keeping the birds out.

There are lots of other ways of using vertical space - what have you tried?  Do you have photos you could share?