Getting an Ooooby Van

What sort of van do we need?
How much should we pay for it?
It must be professional.
Who would drive it?
Where would it live?
Could it be like a grocery van? 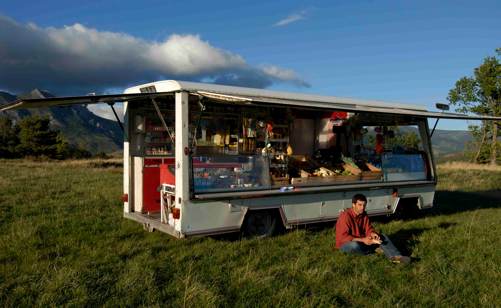 Is this the life for you?

Permalink Reply by Earl Mardle on February 6, 2010 at 6:33am
Before we get to the van, maybe we should poll people about what use they might make of it. I realise that once these things are up and running, more people would hook in, but lets see what the baseline demand might be.

While I would love to be able to call up for a collection of surplus whatever for the Grey Lynn market, at what point does an ability to distribute food on a city-wide scale undermine the local food objective?

Perhaps we could lock ourselves into a model that enable a lot of people in GL to have access to home grown food while diminishing the pressure for other local food programmes to get up and running. I don't get to GL for the market because it is too far away from where I live in Glen Innes. The fact that I don't have a local market for locally grown food creates some pressure for me to do something about it.

Being able to sell stuff in GL might be on a small scale, a replication of the problem we are trying to solve.

The second option of a travelling market also has appeal but again, does it spread resources too thinly? Markets exist as a way to concentrate both supply and demand within easy reach, the travelling market approach is founded in oil-based thinking and maybe not what Ooooby is about.

Just a thought and, as I say, at this stage I'd love access to a service like that and both might well be good transition phases to localisation. Is there some way we could construct the solution so that it provokes and promotes its own demise?

Permalink Reply by Thomas Everth on February 8, 2010 at 1:02pm
How about a van that makes the round past the known and participating growers the day before a market to collect all the 'goodies' for sale. Growers would have an oooby box at their fence / gate / house where they leave an oooby sheet with a summary of the goods in the box. The driver signs the sheet when picking up the goods (perhaps leaving stuff behind and crossing it off the sheet that is not required or not in good quality) and takes the bottom bit or carbon copy with him.
The grower simply txts "yes" to the drivers phone the day before to indicate that there is produce at his box. The driver might make the round in the early hours before the market.
Credit would be applied by the driver for products taken from the box - sold or not. Its up to the driver to make a choice of what to buy at the box and the responsibility for selling it and the risk is then his.
This way the van could have a dual purpose: point of sale and connect the growers with market. The marketing effect of seeing the oooby branded van come around to collect the neighbors produce would be a huge inspiration to others to join the club....

Permalink Reply by Pete Russell on February 14, 2010 at 8:05am
I like your thinking Thomas. Simple methods. Thanks for your input.

And to add the concept: The grower could place an Ooooby Products Wanted sheet in the box too. The driver could then place according items he has already on board into the box or come around after the market and drop such items off. Then check off these items against roooby credits the grower got from what he sold according to some (simple) formula.
This way the Ooooby van makes most of his round and becomes a means of food distribution system that would run perhaps well after individual suburbanites can no longer afford the trip to the market individually (what good is it if the market place is 15Km away and all you want to get is a few days worth of groceries while the cost of the petrol getting there is more than you can afford...)

The thought also arises that as personal motoring becomes a privilege of the rich food distribution to the door as in the past (milk van...) will become again an obvious institution on which many will depend who become technically 'immobile' without their cars. A fate that will befall so many...


The Ooooby van could indeed run of all sorts of alternative fuels - battery driven is one such possibility especially if the run it makes is designed to fit well into its operational profile for the design of its battery capacity etc. And a battery driven van that is only needed to run once or twice a week would spend a good time at home at its solar panel / wind charging station....

Check my 'Elet' out which has been running great now for 1 1/2 years: http://www.transitiontowns.org.nz/node/459

Permalink Reply by Pete Russell on July 13, 2010 at 3:42pm
Hey Thomas. I have only just come across your response now. I was alerted by a friend that you had made this post.

I am buzzing about your 'Elet'! How long would it take to build a van into an elet? What sort of costs are involved?

Permalink Reply by Craig Bovaird on February 13, 2010 at 10:19pm
Just to throw in my proverbial 2c and suggest it be a diesel vehicle, so that it could be run of bio-diesel.

If it is petrol though, we could convert to alcohol.

Permalink Reply by Thomas Everth on February 15, 2010 at 8:49am
... Or on NH3!!! There is a new idea floating around that NH3 or Ammonia is a great replacement of diesel fuel. Check out what Matthew Simmons (Peak Oil) has to say about it: http://www.youtube.com/watch?v=5feSGZN_Zx0
or:
http://www.energy.iastate.edu/Renewable/ammonia/downloads/NHA%20200...

NH3 has a similar energy density as Diesel, is made from H2O and N2 by catalytic conversion releasing O2 and using process heat such as inside the focal point of a concentrating solar mirror or using electric heating from wind mills. When burned it turns back to N2 and H2O. NASA's X15 rocket plane had a NH3 engine and NH3 could double as JetA1 replacement too I believe.
Best of all, if you need some fertilizer on your garden - well Ammonia's main use at the moment is as a fertilizer. Need some household cleaner: dilute with lots of water and presto you have a perfect kitchen cleaner. NH3 might see stellar future.....

Permalink Reply by Pete Russell on February 15, 2010 at 1:17pm
Thanks Thomas. Mindblowing stuff. I'll keep NH3 on my radar.